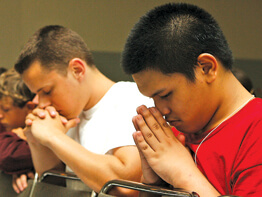 As Gwendolyn Drayton-Forbes strolled through the Baltimore Convention Center with her husband and two sons, the Plainsboro, N.J. resident marveled at the spiritual expertise being presented at the 17th annual Catholic Family Expo.

From the home-schooling curriculum booths to the engaging seminars ranging from marriage enrichment to raising morally devout children, the Queenship of Mary parishioner found her three-day excursion in Baltimore to be fruitful.

She was among the hundreds who attended the four-day conference – from June 28 to July 1 – and said her first expo experience will not be her last.

“There’s so much to learn here, we can’t possibly do it all in the time we have this year,” said Ms. Drayton-Forbes. “This goes beyond the home-school aspect I was looking for.”
Organizers of the expo wanted to offer an event this year that would reflect every aspect of Catholicism for every age.

“Our goal was to excite people about their faith and I think we achieved that,” said Miki Hill, who with her husband, Tim, established the Catholic Family Network at their Woodstock home in 1990. “That has always been our mission.”

Armed with tools to help young people memorize their prayers, Father J. Collin Poston, associate pastor of Resurrection, Ellicott City, eagerly made his way to a convention room to lead a seminar on “Prayer and the Home Educating Family: Don’t Leave Home (or Stay Home) Without It.”

“These are user steps to help us with prayer,” Father Poston said. “Confidence in prayer helps us grow closer to God.”

The 2007 expo was Abingdon resident Lynn Muhler’s third year volunteering for the event and she said she was excited to see how the convention has grown and spawned similar gatherings in the United States and Europe.

“It really gives us an opportunity to minister to so many more people,” said Ms. Muhler, a parishioner of St. Margaret, Bel Air.

Mary Urban of Eldersburg pushed a stroller carrying her 5-month-old son Matthew from seminar to exhibit.

Though she had left her husband home with the couple’s three older daughters June 28, the St. Joseph, Sykesville, parishioner said the entire family would enjoy the final days of the expo together.

For Ms. Drayton-Forbes – the journey from New Jersey turned out to be a fun-filled jaunt for her entire family and she found the change of venue to be as educationally fulfilling as it was spiritually elevating.