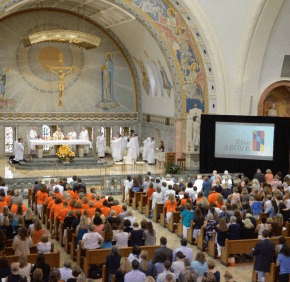 – Returning to the small rural town in Frederick County where St. Elizabeth Ann Seton established the first free Catholic school for girls in the U.S., 1,400 educators from the Archdiocese of Baltimore gathered Aug. 25 to kick off the 2016-17 school year with prayer and a call to spiritual renewal.

Attendees of the annual Catholic Schools Convocation filled the Basilica of the National Shrine of St. Elizabeth Ann Seton in Emmitsburg to capacity, with those who couldn’t fit inside watching via video beneath a large outdoor tent.

Archbishop William E. Lori began the convocation by celebrating a Mass that called attention to the important role St. Elizabeth Ann played in planting the seeds for what would become the Catholic school system in this country.

Attendees of the Catholic Schools Convocation sing during the opening Mass Aug. 25 at the Basilica of the National Shrine of St. Elizabeth Ann Seton in Emmitsburg. (Kevin J. Parks/CR Staff)

St. Elizabeth Ann opened a small Catholic school on Paca Street in Baltimore in 1808. She relocated to Emmitsburg a year later to establish St. Joseph Academy and Free School for the education of girls. The religious order she founded, which would become the Daughters of Charity, grew to be a major force in staffing Catholic schools across the country.

Like St. Elizabeth Ann, Archbishop Lori said in his homily, today’s educators create a space where young people can “grow in grace and wisdom.”

“Your leadership and spirituality are how our schools become not merely private schools,” he said, “but indeed communities where the faith is conveyed to children and families, where knowledge is combined with faith and the development of virtue, and where a spirit of loving service, especially for the poor, shines forth.”

In his keynote address following the liturgy, John-Mark L. Miravalle, a professor of systematic and moral theology at Mount St. Mary’s Seminary in Emmitsburg, encouraged educators to make faith central in the lives of their students by first making faith central in their own lives. The speaker asked teachers and administrators to take time to pray and cultivate a relationship with Christ, no matter how busy they are.

James Sellinger, chancellor of Catholic schools in the archdiocese, noted that the archdiocese has completed a study of 22 schools and is in the process of developing recommendations to Archbishop Lori for strengthening Catholic education.

Additional investments will be made in the areas of grants, aid, facilities, marketing and educational programs, he said.

“We’re sending a clear message to our stakeholders – including all of us – that we are spending every hour of our day looking to improve on the excellence of our schools and to provide the gift of Catholic education to as many children as possible,” he said.

Barbara McGraw Edmondson, superintendent, joined Sellinger and the archbishop in thanking educators for their work. She reminded them that they are called to live out Christ’s command to be “missionary disciples.”

“The primary and most distinguishing mission of Catholic schools is to form and educate students who by our teaching and our example, come to know, love and serve the Lord,” she said.

The archdiocese honored dozens of teachers marking milestone anniversaries, including School Sister of Notre Dame Aloysius Norman of St. Mary Catholic School in Hagerstown, who is celebrating 55 years of service.

Twelve teachers were honored with teaching excellence awards, and Jane Dean, retired principal of St. Margaret School in Bel Air, was presented the Doris Musil Award – the highest educational honor bestowed by the Archdiocese of Baltimore.

Dean, who was principal for 30 years before retiring in 2010, said she was humbled by the recognition. She could not have done her work successfully without the support of pastors, teachers, superintendents and other educational colleagues, she said.

“I didn’t do this alone,” she said before receiving a standing ovation. “God sent me everyone that I needed.   I want you to remember that, too.  You are doing God’s work – the best work in the world, in my book.”

Before and after the convocation, participants toured the historic grounds of the basilica, which houses the remains of St. Elizabeth Ann. They also had opportunities to go to confession.

“This is always a time to focus on why we all chose to become Catholic educators,” said Ken Pipkin, new principal of St. Joseph School in Fullerton.

Attending the gathering was almost like receiving a “warm hug,” he added.

“We take that spirit back to our schools and share it with our students,” he said.

To see more photos from the convocation or to order prints, visit our Smugmug page here.