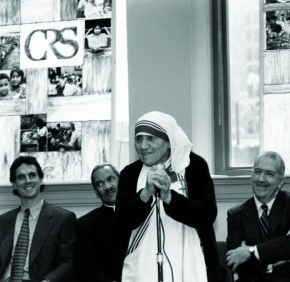 By Mary K. Tilghman
Special to the Review
Sean Callahan was sick.
Two decades ago, while in Kolkata, as Catholic Relief Services’ East India regional director, he found himself suffering from typhoid fever and two strains of hepatitis.
His doctor said Callahan’s liver was functioning poorly. With no hospital beds available, however, he wanted to send the ailing man home.
“Someone got word to Mother Teresa,” Callahan, now CRS’ chief operating officer, recalled during an interview at the Baltimore headquarters of the U.S. bishops’ international relief agency.
She sent a Spanish nurse to care for him while he suffered through chills and sweats. He got into the hospital the next day, but his condition did not improve.
“They couldn’t figure out what was going on,” Callahan said.
Blessed Teresa came to his aid again, sending an ambulance and arranging for a medevac to a hospital in Singapore.
Once stabilized, he returned to the U.S. to recuperate, but after two years in Baltimore, returned to India in 1997.
He served in New Delhi as regional director for South Asia, which included India, Afghanistan, Nepal and Bangladesh. Through both assignments, he worked closely with Blessed Teresa and the order of religious women she founded, the Missionaries of Charity.
That partnership began in the mid-20th century, according to Jim DeHarpporte, regional director of CRS West, based in San Diego. Like Callahan, he worked closely with Blessed Teresa when he was in Kolkata in the late 1970s.
“She got love and respect from all people of all faiths,” he said.
As the world prepares for her Sept. 4 canonization, Callahan recalled her joy, humility and can-do spirit.
He learned early that the woman now known as Blessed Teresa would not take no for an answer, as Callahan said he always replied to her requests with, “Yes, Mother.”
After a flood in Bangladesh, Callahan had trucks filled with supplies ready to send – but not the government permits to cross the border. Blessed Teresa ordered him to be ready in two hours.
Cutting through red tape may have daunted others, but Blessed Teresa got the necessary permits in time.
“She saw our lives as an opportunity to serve,” said Callahan, who with his wife, Piyali, and their two children, attend the Church of the Resurrection in Ellicott City.
Callahan was serving in Nicaragua when he was asked to consider a post in India in 1992.
“I didn’t know too much about India and less about Kolkata,” he said. “If that’s where the agency needed me, that’s where I’d go.”
In Kolkata, Callahan oversaw services for 300 million. Some 3 million live on the streets, almost the population of Nicaragua. He oversaw assistance to schools, orphanages, homes for the sick and dying, and other Missionaries of Charity projects, as well as other health and agricultural programs and emergency humanitarian aid.
He remembers Mass at the Missionaries of Charity chapel soon after his arrival as a “surreal experience.”
As the nuns sang, vehicles screeched on the Indian streets. After Blessed Teresa warmly greeted every worshipper, he was surprised by the tiny woman’s large hands.
“They enveloped you,” said Callahan, noting that she was so soft-spoken, to hear her, “You had to lean in.”
At home, she welcomed every visitor, and never hesitated to ask for help, offering people a chance to give or volunteer, said Callahan.
“It was always the positive,” he said. “Almost anything was possible.”
Her joy in serving others was contagious. Now Callahan asks himself, “Am I doing what I could be doing to help others?”
He’s not sure Blessed Teresa would appreciate the coming accolades.
“In a lot of ways she was too busy for that,” Callahan said.