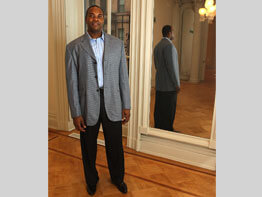 Eric Greene knows three classmates from his Catholic elementary school who have died. Others he knows from his old neighborhood are strung out on drugs or in jail.

“Music saved my life,” said the 35-year-old baritone opera singer who performs on stage nine months of the year with assorted opera companies.

The alumnus of Father Charles Hall Catholic School, Baltimore, and the since closed Rosa Parks Catholic Middle School, grew up fatherless in Sandtown. He attended the Baltimore School for the Arts, and The Juilliard School in New York City, where he earned both a bachelor’s and master’s in music.

Once during high school, something awakened in Mr. Greene while he was costumed as a peasant on stage at The Lyric Opera House.

Now a father to 4-month-old Joshua and the husband of Gwen Greene, a senior software engineer, the singer travels the world living his dream.

Mr. Greene’s best gig so far, he said, was for the Lyric Opera of Chicago, ranked No. 2 in the states. He recently returned from a month in Luxembourg performing a rendition of “Porgy and Bess,” an opera in which he has performed for other companies in Paris and Spain. Among other productions on his resume are “Carmen” and “Madame Butterfly.”

Since the opera season runs fall to spring, Mr. Greene has summers off. Once touched by “great teachers” in Catholic school, the 6-foot-5 singer said he has found a way to give back – as a mentor in Super Kids Camp for behaviorally challenged inner-city residents.

In a big brother kind of way, he assists the kids with reading, talks with them about good behavior, advises them to listen to their parents and teachers, and stresses the importance of following morals.

“The whole idea of me going back to mentor is a direct result of my experience in Catholic school,” said the baritone, now a member of the Church of the Redeemed of the Lord on Old York Road.

“One thing I got (from school) is discipline and a continual reminder that God is the center of everything. My home was that way, then to go to school and see and hear that – it reinforced what I heard at home.”

“Eric’s spirituality is one of his greatest qualities,” said M. Kathleen Filippelli, principal of Father Charles Hall Catholic School. “If you know him, then you know that God is the center of his life.”

The care one nun took with Mr. Greene in his early years of Catholic school is something he has never forgotten. He remembers the silent decision he made as he helped “Sister Clarisse” clap erasers and wash chalkboards: “I’m going to be a good guy from here on out.”

“She talked to me,” he said, “said I had a good heart and a nice smile. It’s the same thing I try to transfer when I’m with the kids.”

“There is nothing like it for me,” she said, “watching Eric perform in an opera or singing at a Filippelli family special event. He is a pleasure to have taught, a pleasure to know, and it is a privilege to call him my friend.

Departing for Philadelphia this month, the singer will play the role of Ping in the Italian opera “Turandot” until March, then it’s on to North Carolina and San Francisco (its opera house is ranked No. 3) before returning to Baltimore to reunite with his family and mentor the camp kids.

“I can’t imagine doing anything else in life,” said the man with the deep, smooth voice. “My greatest ministry is music.”