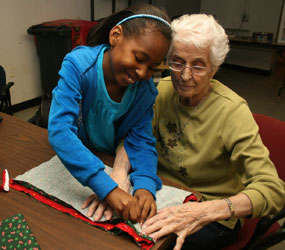 When anti-Catholic prejudice was still rampant in the South during the early 1950s, Sister Marietta Russell was knocking on doors and sharing her faith in the small towns of South Carolina.

Dressed in the full habit worn by the Mission Helpers of the Sacred Heart, Sister Marietta spent time listening to the needs of people in upscale neighborhoods and the poorest cotton plantations. She instructed many in Christianity and even won the trust of Protestant pastors who allowed her to minister among their congregants.

“I really enjoyed going to the people where they were hurting,” said Sister Marietta, an 85-year-old retiree who lives with other Mission Helpers in Baltimore. “We talked about God and where they were in their lives and we heard their pain. We did a lot of listening.”

Although she’s been retired for six years, Sister Marietta hasn’t slowed down. She helped start a sewing club at Transfiguration Catholic Community in Baltimore and volunteers every Saturday teaching 12 inner-city youths how to make clothes.

“At 85, you get tired,” the Baltimore native acknowledged with a laugh, “but it’s a great tiredness.”

Sister Marietta is one of approximately 173 retired religious sisters, brothers and priests who live in the Archdiocese of Baltimore. They devoted their lives to serving others and now the Catholic community is remembering them with an annual special collection benefiting the National Retirement Fund for Religious.

With a struggling economy and an ever-increasing number of retired religious, Catholic leaders say the need is greater than ever.

According to the National Religious Retirement Office, there are more than 35,000 religious, mostly women, who are older than 70. More than 5,500 need skilled nursing care.

Sister Marietta noted that when she and other religious were active in fulltime ministry, they were not eligible for Social Security. She worked for just $200 a month. In their retirement years, elderly religious depended on the work of younger members of their congregations. Today, as the number of elderly religious far outstrips the younger members, financial resources aren’t as available.

“We worked for nothing, so nothing went into the bank,” Sister Marietta explained, pointing out that it wasn’t until 1972 when religious became eligible to participate in Social Security. “We always had to trust – that was the purpose of the vow of poverty.”

Father Matthew O’Rourke, a 91-year-old Josephite priest who lives at St. Joseph Manor in Baltimore, said he is “edified and encouraged by the fact that people remember us.”

A New York native, Father O’Rourke was the first principal of St. Augustine High School – a historic Catholic institution in New Orleans founded in 1951 to minister to the African-American community.

“We were very much interested in the social questions of the time,” said Father O’Rourke, noting that St. Augustine offered classes to teach African-Americans how to pass what he called “terrible” tests required by the state for blacks to vote.

“We succeeded in getting people out to vote,” he said, “and because of that experience, the youngsters became very attuned to the political situation and they worked to safeguard the rights of blacks in the city.”

Father O’Rourke later ministered in a variety of other capacities and served as the superior general of his religious community in the 1970s. He and other retired Josephites today spend much of their ministry in prayer.

“Our life is mostly a life of prayer,” said Father O’Rourke, noting that the men who live in retirement at St. Joseph represent 555 years of service to the Catholic Church in the African-American community. “I look at the (St. Joseph Manor) as a vestibule to heaven.”

Xaverian Brother Daniel Lynch, a New York native who entered the Xaverians in 1951, spent all his ministry in education – including several decades working among members of the Lakota Tribe.

Now 75 and retired, Brother Daniel volunteers to help Baltimoreans earn their GED at the Learning Bank in the city.

“I think it means a lot that people care about retired religious and they see what they received by the work we have done,” Brother Daniel said. “They are saying ‘thank you.’

Approximately 95 cents of every dollar donated to the National Religious Retirement Collection assists with the costs of elder care at religious institutes throughout the country.

The special collection for retired religious will be held Dec. 12-13. Donations may be contributed at local parishes or checks may be mailed to: Office of Consecrated Life, 320 Cathedral St., Baltimore, MD 21201.