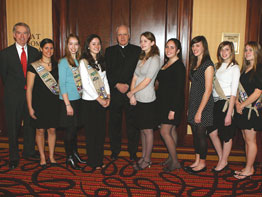 More than 750 men, women and students packed a ballroom in Renaissance Baltimore Harborplace Hotel March 4 to applaud the efforts of the honorees at Catholic Charities’ annual distinguished service awards banquet.

This year’s award winners include a volunteer at Our Daily Bread, a longtime foster mother, a dedicated employee who has spent 40 years with the organization, a former member of the board of directors and a northern Baltimore County Girl Scout troop.

This year’s banquet theme was “Walking on Water,” symbolizing the faith needed to accomplish the philanthropic group’s mission and the risk involved carrying out the work, said Harold A. Smith, executive director of Catholic Charities.

“The water is a metaphor for life,” Mr. Smith told the audience. “If we want to walk on water, we have to get out of the boat.”

When Clarksville resident Mary Agnes Lewis was given her distinguished service award, the 79-year-old mother of 10 said her 23 years as a volunteer hot-meal server to the homeless at Our Daily Bread in Baltimore has provided her with more rewards than she has dished out.

“When I first heard through my church that Our Daily Bread needed volunteers, I knew this would appeal to me,” said Ms. Lewis, a parishioner of St. Louis, Clarksville. “I knew I would see the results of my contribution that day.”

In addition to her volunteer work, she enlisted the support of St. Louis, which makes a donation of 900 chicken dinners each month.

In 2006 Ms. Lewis began hosting the Ten Oaks Cup Polo Match at her home, and the annual event has raised more than $100,000 for the Our Daily Bread meals, said Monsignor Joseph L. Luca, pastor of St. Louis.

Doris Lyles of West Baltimore couldn’t believe it when she learned about her award, recognizing her 14 years as a Catholic Charities foster parent to eight children during that time.

“I just don’t think about this as something you get an award for,” said the 64-year-old foster parent, who has also recruited other families to open their homes to foster children. “Money can’t buy you the reward you get when these children start to buy into the values you have instilled in them.”

In the 40 years John Rusinko, 65, of Jacksonville, has worked for Catholic Charities, he has touched the lives of more children with mental health needs than anyone else in the state of Maryland, said Mr. Smith as he presented him with his award.

Under the St. Joseph, Cockeysville, parishioner’s leadership as division director, Child and Family Services has grown from two programs in 1967 to a nationally accredited 37-program division with more than 1,000 employees today, Mr. Smith said.

While accepting the award, Mr. Rusinko credited the members of his staff for empowering families in crisis to make positive changes that restore their lives.

“As time goes on, I recognize the spiritual component of what we do has become more important to me,” he said. “It’s what our faith is about.”

Retired chief executive officer of T. Rowe Price, George Collins, recalled his shock when he learned about his award for the six years he served on Catholic Charities’ board of directors and his role in relocating Our Daily Bread to its new location.

Now living in both Connecticut and Florida, the 67-year-old former parishioner of Our Lady of the Chesapeake, Lake Shore, said “only through Christ was I able to give back through the rewards I earned.”

The eight members of Girl Scout Troop 1195 received the youth service award because of their work at St. Vincent’s Center in Timonium for children with emotional and behavioral disabilities due to neglect or abuse.

For the past two years, the teenaged girls continued a tradition that began with another Girl Scout troop of running a Christmas gift shop at the residential facility, allowing the children to select the right present for three family members or friends.

“There is nothing like seeing the faces of these kids when they are picking out their gifts,” said Alanna Morici, 15, of Baldwin. “That’s really award enough for us.”

That is the sentiment Archbishop Edwin F. O’Brien said is evident among the 10,000 volunteers in the many Catholic Charities programs, and he told the audience he is very impressed with what he has seen while touring the facilities.

The organization’s motto “Cherish the Divine Within” is exceedingly appropriate for Catholic Charities, Archbishop O’Brien said, and the dedication among the volunteers and staff he’s witnessed is inspiring.

“That spark within is God’s love within you,” he told the audience members, and urged more people to volunteer for a Catholic Charities’ program. “God’s love needs hands.”