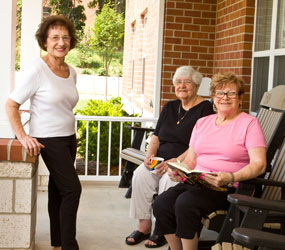 Catholic Charities is mailing applications to those on the waiting list for what will be its 22nd senior-housing community, Our Lady of Fatima II in Baltimore, which is scheduled to open in January.

Throughout the archdiocese, Catholic Charities offers safe, affordable housing for seniors of modest means– a mission it has fulfilled for more than 30 years. And, yes, small pets are allowed, too.

“Our mission is to serve seniors and others in need, those people with low or moderate incomes,” said Rosemary Horstman, director of property management for Catholic Charities. “We develop and build and manage affordable housing.”

Twenty-one communities are already available, offering 1,560 units; Our Lady of Fatima II will bring the total to 1,611 units. By the summer of 2012, Catholic Charities expects to add another 94 units in a new community planned for South Perry Hall. The attractive, bright apartments average about 540 square feet.

Catholic Charities offers two types of housing, HUD Rent Assisted Housing and Tax Credit Properties. In HUD units, residents pay no more than 30 percent of their adjusted gross income in rent, and their income level cannot exceed $28,800 for one person or $32,900 for a two-person household. The adjusted gross income makes allowances for medical expenses, and the program is flexible; if a resident’s income changes because of something like unexpected medical expenses, the rent can be recalculated. The income limits, too, change annually, to allow for cost-of-living increases.

“We can’t do this without the federal government,” she said, adding, “Our housing is open to everyone – you don’t have to be Catholic to live there.”

Tax credit housing – found in the communities of Everall, Kessler and St. Mark’s – provides options for seniors with slightly higher incomes; one person can make up to $34,560 while a two-person household can have an income of up to $39,470. The units are financed through a state tax-credit program. The Perry Hall community will offer a mix of both types of housing.

Most of the residents of Catholic Charities communities are independent, and their units include full kitchens. But seven communities – Arundel Woods in Glen Burnie; Basilica Place in Baltimore; DePaul House in Violetville; Friendship Station and Friendship Village in Odenton; St. Joachim in Violetville; St. Luke’s in Edgemere; and Trinity House in Towson – offer additional services, such as meals, housekeeping and laundry.

“That’s an extra helping hand above independent living,” said Horstman, adding that all of the residences have service coordinators who help residents learn about and apply for any services they’re entitled to, such as Medicare access or a prescription drug plan.

“The job of the service coordinator is to link the needs of the residents with services in the community,” Horstman said.

The units themselves are mostly one-bedroom garden apartments, but some two-bedroom units are available, and Basilica Place is a high-rise building. They’re all built using the principles of universal design, which creates living spaces that are easier to navigate at all stages of life, with touches such as lever door handles.

“Our buildings’ amenities rival those of any of the market-rate communities,” Tinney said. The well-thought-out communities include places for gathering, such as a multipurpose room, library, lounges and even the laundry room.

“We recognize that that’s a social pastime, and we provide space for them to sit and talk,” Horstman said.

Safety is paramount. The buildings require card keys for entry, some buildings have security personnel on site, and all of the units are equipped with an emergency response system.

There are no fees to get on the waiting lists for the communities, and Horstman and Tinney encourage people to get on the lists, which can range from 60 people to several hundred, depending on the community. For an application for Our Lady of Fatima II, call 1-888-710-9806. To obtain applications for other Catholic Charities communities, call 1-443-798-3423. To tour an apartment online, visit www.cc-md.org/senior-housing.