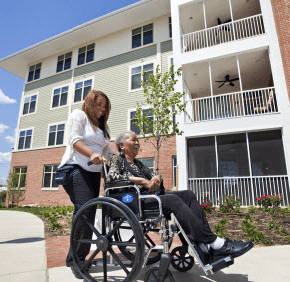 “People just go in,” said Nate Sweeney, the home’s administrator and guide, “and say, ‘Wow.’ When you see families who have someone in a nursing home walk in, you just see this wave go over their faith when they realize, oh my gosh, it could be different.”

The new long-term care facility is based on a progressive care model that diverges from the traditional nursing home’s institutional design and care for an atmosphere that feels and operates like a family home. The Green House celebrated its grand opening April 19. It has four residents but will accommodate 49.

The residence is the first of its kind in Maryland. Catholic Charities of Baltimore operates the $12.6 million facility, which was created and is owned by the nonprofit, ecumenical faith-based affordable housing developer Govans Ecumenical Development Corporation (GEDCO), as part of its Stadium Place development. More than $2 million came from the Harry and Jeanette Weinberg Foundation.

A mixed-income retirement community, Stadium Place currently includes four apartment buildings, a YMCA, a meditative garden and playground. GEDCO plans to add a “village center” with stores and a restaurant, and more senior housing to the site, according to Mitchell Posner, GEDCO’s executive director.

Keeping with the mission of both GEDCO and Catholic Charities to serve the poor, at least 60 percent of the Green House’s residents are expected to be Medicaid recipients.

Each floor of the four-story Green House building operates as its own home with 12 residents – whom the Green House staff call “elders.” Elders live in single rooms with their own bathrooms and share common spaces.

Green House founder Dr. Bill Thomas pioneered the model a decade ago in Tupelo, Miss. Now there are more than 100 Green Houses in 27 states.

Green House homes are to be “warm, smart and green,” said Sweeney, who was taught by Thomas while pursing a master’s degree in the management of aging services at the University of Maryland Baltimore.

The vision is reflected in small details, such as granite kitchen countertops, comfortable furniture and hospital beds with wooden headboards and side rails. Each home has large windows and a porch overlooking a baseball field for youths, a reminder that the site once held Memorial Stadium, home of Baltimore Oriole and Colt championship teams.

GEDCO began to develop affordable senior residences in the 1980s, and quickly realized that it needed to look at nursing home care, to meet the continuing needs of residents. It put the idea on hold for years, but decided to adopt the Green House model when the opportunity to develop a long-term care facility arose, Posner said.

Green Houses meet state and federal long-term care facility requirements. Each home has a commercial kitchen, and each caregiver is trained to cook according to food safety standards. The kitchen looks out into the living and dining area, where a long, chair-ringed table makes it possible for the caregivers to eat along with the elders, family-style.

Instead of working in separate departments, each caregiver cooks, cleans, does laundry and helps the residents with their physical care. Balancing the tasks is like being part of a family, said Brook Charles, a Green House caregiver.

“You get that one-on-one. It’s a lot more personal,” he said.

Elders are encouraged to live according to their own schedules. They choose when to rise, what to eat for breakfast, when to bathe, and how to spend their day. Nutrition is monitored, but the elders’ wishes are accommodated. Fitting care to each elder’s life means they are less likely to become agitated and more likely to be happy, Sweeney said.

“It’s finding that balance between still ensuring that quality care is given, but that you’re making people happy,” Sweeney said. “It’s about creating the natural experiences of life.”

Resident Shirley Dickens said she likes the Green House more than facilities where she lived before. “It’s alright by me,” she said.

The Green House “is a perfect fit” for Catholic Charities, Sweeney said. Already, the organization provides home-like care settings at the Neighborhoods at St. Elizabeth, a Baltimore nursing home, and through its Gallagher Services, which includes small group homes for adults with disabilities.

St. Elizabeth has taken strides to change its culture to become more home-like, and the Green House takes that vision to another level, Sweeney said.

“Staff are able to care for the whole person, and they’re empowered, because they’re working closest to them, to make decisions that fit what the elders want,” Sweeney added. “That lets room for love into the equation.”