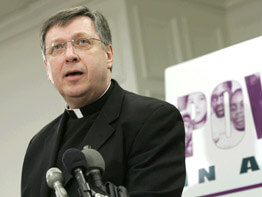 WASHINGTON (CNS) – Catholic Charities USA Jan. 10 launched an ambitious campaign to cut poverty in America in half by 2020.

“The poor do belong to us. … They are our brothers and sisters,” Father Larry Snyder, Catholic Charities USA president, told an overflow crowd at a Capitol Hill briefing announcing the Campaign to Reduce Poverty in America.

Noting that 37 million Americans – 12.6 percent of the population – currently live below the poverty line, he said Catholic Charities USA and its affiliates, working in partnership with government, the private sector and other nonprofits, will launch “a concentrated, systematic effort to cut poverty in half by 2020.”

The briefing introducing the campaign was attended by media, legislators, legislative aides and leaders of other Catholic organizations engaged in social service and advocacy for the poor.

Participants received the newly released Catholic Charities USA policy paper, “Poverty in America: A Threat to the Common Good.” It sets the moral and analytic framework for the campaign and spells out specific policy proposals for a sustained drive to reverse the growth of poverty in the United States.

Maureen Murphy, an associate division manager of Catholic Charities of Chicago, said that with housing prices in Lake County, Ill., someone has to earn $17 an hour at a full-time job to afford a two-bedroom apartment. For someone earning the current minimum wage, that would mean working 133 hours a week, she said.

Saying that a society is judged by how it treats its poor, Father Snyder described the current situation in America as a “moral crisis.”

He said the number of people seeking assistance from Catholic Charities agencies across the country is rising faster than the amount of resources available to assist them. Since 2002, the number of people seeking emergency assistance has increased 14 percent, he said, and the total number served by Catholic Charities nationwide has risen to nearly 8 million a year.

“As a society we cannot continue to abandon” those who are poor and in need of assistance, he said.

Citing the importance of a higher minimum wage, he said, “Today too many Americans are working hard without being able to make ends meet.”

Ron Jackson, executive director of the District of Columbia Catholic Conference and a veteran lobbyist for the poor on Capitol Hill, attested to the role of government in combating poverty.

Debates whether government anti-poverty programs work have been going on since President Lyndon B. Johnson launched his Great Society reforms in the 1960s, he said.

Mr. Jackson told the group that growing up poor in Louisiana he was able to work during high school because of Johnson’s Neighborhood Youth Corps program. He said that as the fourth of five children he could not have gone on to college without the money he had saved through work in that program, which was enough to get him through the first year’s tuition and into the second.

“It was a way to lift me out of poverty,” he said.

He said one-third of the children in the District of Columbia live in poverty and last year alone the city lost about 12,000 units of affordable housing. If the nation is going to commit itself to reversing poverty, “it would be a good idea to start right in the nation’s capital,” he said.

Janet Valente Pape, chairwoman of the Catholic Charities USA board and executive director of Catholic Charities of the Diocese of Wichita, Kan., said the new campaign is meant to challenge not just the church and the government, but everyone.

“We absolutely need to reverse the trend of the increasing number of poor in this country,” she said.

She called for a combination of “moral outrage and political will” to create a turning point and bring the nation “to engage in a long-overdue debate about the plight of the poor.”

In the Wichita Diocese, where Catholic Charities served “well over 20,000” clients last year, she said, “78 percent of our clients live below the federal poverty guidelines.”

“More than 50 percent of those served in our shelters are children,” she added.

She said a Catholic Charities clinic in Wichita that serves people without health insurance used to find that most of the uninsured were elderly or unemployed. Today, “60 percent are employed and it’s going up,” she said.

Catholic social teaching does not call for complete equality of income, but it does condemn “extreme inequalities of income and consumption,” she said.

What the campaign seeks to establish is “a floor of material well-being on which we all can stand,” she said.

Stephanie Baldwin, a single mother who received help from Catholic Charities of Trenton, N.J., and now has a secretarial job with that agency, described how Catholic Charities helped her when she and her young son were homeless, providing transitional housing and other assistance to help her get out of a cycle of welfare and get part-time work.

“I love my work at Catholic Charities,” she said. She added that the salary she is paid is fair for a secretary in a nonprofit organization, but after insurance, taxes and other deductions, her net pay of $1,320 a month makes it a struggle every month to meet the bills for rent, food, health care and day care for her son.

When a new landlord came in last year and raised the $900 monthly rent for her two-bedroom apartment, she said, she and her son were forced to move to a one-bedroom apartment in a more dangerous neighborhood.

“The cost of living is out of reach for more and more people like me,” she said.