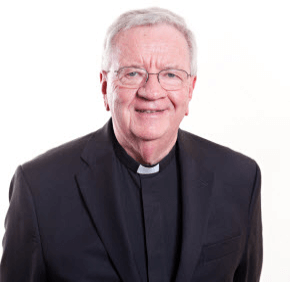 Burly NFL football players are multi-million-dollar athletes who earn a living repeatedly knocking one another to the ground.

These men – at least the Baltimore Ravens – also have gentle and spiritual sides, said Father Christopher J. Whatley, pastor of St. Mark in Catonsville and Catholic chaplain for the Ravens since 2008. He was previously their chaplain for the 1996-1998 seasons.

“They slam people around on the football field,” Father Whatley said. “When you interact with them, they’re nice gentleman.”

Father Whatley described Ravens players and coaches as “strong witnesses to the Gospel.”

“Even though they’re caught up in a very demanding schedule, they still find the time to attend Mass,” he said.

Father Whatley and Rod Hairston, chaplain for the Ravens and founder and senior pastor of Messiah Community Church in Owings Mills, hold their respective services concurrently at a downtown hotel near the stadium before every home game – Thursdays, Saturdays, Sundays or Mondays.

“The fellows who go to Rod’s service, most of them will take their Scripture with them,” Father Whatley said. “It’s important they have some type of prayer. They want to pray beforehand.”

“The fellows who come to Mass are there faithfully,” said Father Whatley, who also sees Harbaugh’s parents at Mass – father Jack and mother Jackie – when they are in town for a game.

Father Whatley delivers the same homily at St. Mark and the hotel, but the Ravens hear an abbreviated version with a tailored message.

“I don’t do anything extraordinary,” Father Whatley said. “I do what I do every Sunday and that’s share the Gospel with believers … and how what they do can bear witness to the Gospel of Jesus Christ.”

Before the Super Bowl, Father Whatley texted John Harbaugh and “told him to just place his trust in God.”

The Ravens as Super Bowl champions is “great for the community, it’s uplifting for the community,” Father Whatley said. “I’m happy for both of the Harbaugh brothers. I know both of them. They love one another, they truly do. Their ability to compete and maintain fraternal love should be an example of all of us.”

Father Whatley, whose Ravens gear includes a jacket, hat and a couple of throw pillows, doesn’t cheer for a specific player.

Father Whatley, who chipped a tooth playing the sport as a youth in New York, watches Ravens games on T.V. in the rectory.

“Do I miss the games? I never miss a second,” said Father Whatley, who wasn’t in New Orleans for the Super Bowl.

“I don’t go on the road with them,” he said, noting that when the team travels, it can request a priest or minister. “It takes too much time away from the responsibilities here (at St. Mark) and they’re (the Ravens) OK with that.”

“It’s a great conversation starter with the middle school kids,” he said. “They’ll ask what they’re like.”

Harbaugh parents brace for ‘thrill of victory’ and ‘agony of defeat’