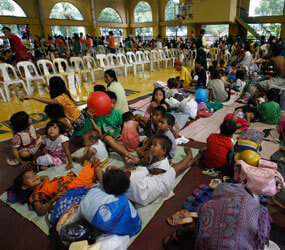 MANILA, Philippines – Catholic aid agencies worked to provide shelter and emergency relief to hundreds of people forced to flee their homes after the strongest typhoon in four years battered the northern Philippines.

“We appeal to kind-hearted people, organizations and institutions to share donations for the victims,” said Sister Perpetua Bulawan, coordinator of Caritas Filipinas Foundation, the church’s relief and rehabilitation program in Manila. She spoke Oct. 19, a day after Typhoon Megi hit.

She said the program had appealed to Caritas Internationalis partners around the world for assistance as well.

Sister Perpetua said toiletries and food are most in need.

“If the people get hungry, they’ll become ill,” she said.

Churches in northern Luzon prepared to assist people who lost their homes after the storm made landfall in Isabela province, the Asian church news agency UCA News reported.

The storm left at least 13 people dead and nine injured, the National Disaster Risk Reduction and Management Council said. Crops throughout the region were destroyed by the storm’s 140-mile-per-hour winds.

The Philippine government’s Department of Social Welfare and Development welcomed more than 8,000 people forced from their homes in 57 villages across seven northern provinces.

“We will channel aid through the dioceses in affected areas,” said Laura Sheahen, CRS information officer.

“We’re focused on getting assistance to these areas as quickly as possible,” added Joe Curry, CRS country representative in the Philippines.