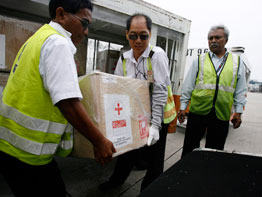 BANGKOK, Thailand – A Catholic aid agency already working in Myanmar when Cyclone Nargis struck has been grappling with travel restrictions as it tries to assess the situation and help survivors in the Irrawaddy delta region.

“We would be able to do noticeably much more in terms of aid if our team could travel to the affected region in the Irrawaddy delta area. But the Myanmar government does not allow our international aid workers to go there,” Ingo Radtke, head of Malteser International, told the Asian church news agency UCA News May 8. UCA News, based in Bangkok, received an e-mail from officials at Malteser’s offices in Germany.

Malteser’s international staffers are prohibited from traveling to the project areas where they were working before the cyclone hit May 3. An agency official said Myanmarese staffers have to inform the authorities before traveling outside Yangon, the capital.

Malteser International, formally the Order of Malta Worldwide Relief, has been working in Myanmar since 2001 on several humanitarian projects, including health care and safe drinking water projects.

The agency hoped restrictions would ease, facilitating relief efforts, but travel permits that had been issued to international staffers were withdrawn.

Staffers went out May 8 on their third assessment in the Thongwa district and distributed medicine.

“The situation here is really dramatic,” said Birke Herzbruch, project coordinator in Myanmar, in a May 5 report from Yangon that was obtained by UCA News May 7. Yangon and the Irrawaddy delta are the two worst-hit areas.

“Fortunately, the water tank we have built next to the health center in Tantabin was not damaged by the cyclone,” Mr. Herzbruch said. “The tank has a volume of 22,000 liters and provides water for the whole neighborhood.”

Despite these difficulties, the agency has been distributing plastic sheeting, cookware, mosquito nets and more water to households. The team said there is a great need for food and safe drinking water, tents, plastic sheets or other material for temporary shelter, household items, medicine, clothes and blankets.

“Damage to buildings is substantial in Yangon and the surrounding areas,” said Cesar Russo, a logistics expert with the agency, in his report.

“Most of the wooden structures have been destroyed or seriously damaged,” he said, referring to damage to homes.

A large number of people have sought refuge in community centers, temples and school buildings where the health conditions are deteriorating, he reported, saying shortages of food, bottled water and fuel are evident as prices continue to increase. Most of the temporary shelters need immediate relief assistance, Mr. Russo said.

“Fortunately,” Mr. Herzbruch said, “none of our staff members were injured. But of course the local staff are affected by the consequences of the cyclone, so that in addition to their work they have to take care of their families, too.”

As of May 8, Myanmar’s government estimated more than 80,000 people died in the disaster. Other sources feared the death toll might pass 100,000.

According to Malteser International headquarters in Germany, the organization has provided about $77,500 for current cyclone relief activities and has received a matching amount from Caritas Internationalis, a network of Catholic aid agencies, to help with its work.