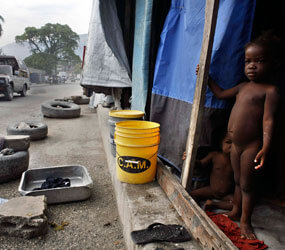 WASHINGTON – Catholic agencies around the world have collected more than $303 million for Haitian earthquake relief with additional funds continuing to arrive daily.

The amount – totaling $303,362,571 as of Aug. 10 – reflects money from special collections sponsored by the U.S. Conference of Catholic Bishops, Catholic Relief Services, the worldwide network of Caritas Internationalis agencies and a smattering of other Catholic-connected agencies sponsoring ministries in Haiti.

The total is likely to be significantly greater because the figures provided by Caritas Internationalis, the Vatican-based umbrella organization for Catholic humanitarian and development agencies, exclude money raised by organizations and religious orders and congregations outside of the Caritas network.

A total of $82,269,255 was donated during special collections in dioceses in the weeks after the quake, according to figures compiled from the USCCB and CRS.

CRS has collected an additional $65,204,026 on its own, making the U.S. Catholic community the largest contributor in the world to earthquake relief efforts.

The USCCB credited Catholics for their generosity for responding to the needs of Haitians after the Jan. 12 disaster even as they may have been confronted by the worldwide recession.

“American Catholics are not just fair, I think they’re more than fair,” said Oblate Father Andrew Small, director of the Collection for the Church in Latin America for the U.S. bishops. “When you see someone suffering, you try and help them. When you see someone desperate, you do everything you can to help them. Given the unique nature of the devastation, we saw a unique outpouring of compassion and concrete generosity.”

Outside of the U.S. effort, donations to the network of Caritas Internationalis agencies around the world totaled $151,247,000, the agency reported to Catholic News Service.

In the United States, The Chronicle of Philanthropy reported that two Catholic-related agencies collected more than $4.6 million for recovery efforts. The Catholic Medical Mission Board collected $2,466,498, while Fonkoze USA, a bank for poor Haitians started by a Haitian priest, collected $2,175,792, the publication reported in July.

Those amounts are included in the total funding figure.

As for how the funds are being spent, only information about the U.S. funding is available.

Father Small said the bishops’ administrative committee decided in March to allocate 60 percent of the special collection to CRS for humanitarian needs and use the remaining 40 percent for ecclesial needs, such as the rebuilding of churches and parish schools and restarting ministries.

That means, of the $82.2 million collected, $49.3 million will go to CRS while $32.9 million will be used for rebuilding the Haitian church.

“The bishops recognized that in their initial appeal they were aware that the church is really the only group that’s going to look after church needs,” Father Small explained. “So it was important that that be made clear at the outset of the initial appeal.

“So the question was, ‘Who needs what?’ I think (the bishops) realized that no matter how much of an assessment was done on the needs, not even the money we collected would really adequately address what is needed. They decided what seems like a fair division so that the entire church … can start planning what needs to be done. To wait for a so-called comprehensive assessment to be done, we’d still be here in 10 years,” he said.

Members of the U.S. bishops’ Haiti Advisory Group and a team of U.S.-based engineers have met with Haitian church officials and Archbishop Bernardito Auza, papal nuncio to Haiti, to begin planning how to prioritize spending. The effort is emphasizing appropriate construction methods so that new structures can withstand earthquakes as well as strong hurricanes.

Seventy parishes in the Archdiocese of Port-au-Prince and the Diocese of Jacmel were destroyed or seriously damaged by the quake, while an additional 30 chapels and mission stations must be rebuilt, according to Archbishop Auza.