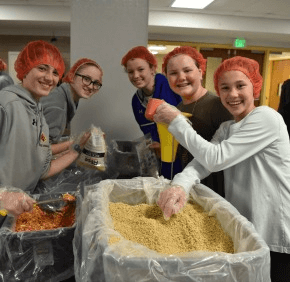 By Bo Smolka
Special to the Review
It didn’t take long for the team of five middle-school students from the School of the Cathedral of Mary Our Queen in Homeland to get into a nice rhythm.

Carter Kelly dropped a small pouch of vitamins through a funnel and into a plastic bag about the size of a large envelope. Ellie White followed with a cup of soy flour. Natalie O’Neill added a scoop of dried vegetables, and Tess Gilmore topped it off with a cup of rice. Cate Hardin slipped the full bag out from under the funnel and handed it off to be weighed and sealed.

In less than a minute, the girls had assembled one of the nearly 1,700 prepackaged meal bags that were put together in the school cafeteria March 31, then sealed, boxed and prepared for shipment to Burkina Faso in West Africa.

The project was part of CRS Helping Hands, a joint effort of Catholic Relief Services and North Carolina-based Rise Against Hunger. This marked the second straight year the Cathedral of Mary Our Queen Parish has held a CRS Helping Hands meal-packaging event as a Lenten outreach initiative.

Frederick Tan, with help from his sons, Ethan and Zac, boxes prepackaged meals at the Cathedral of Mary Our Queen in Homeland March 31, during a CRS Helping Hands project. (Courtesy Beth Awalt/Cathedral of Mary Our Queen Parish)
“It’s a good opportunity for families to come together, for parishioners old and young, and truly help people who have to worry about where the next meal comes from,” said Monsignor Richard Woy, rector of the cathedral.

About 100 Cathedral parishioners took part, including eighth-grade confirmation candidates who helped convert the school cafeteria into a meal-packaging assembly line.

With each meal bag designed to serve six when boiled in water for 25 minutes, the group assembled 10,152 meals in less than two hours.

Seminarians from nearby St. Mary’s Seminary and University did some of the heavy lifting – hauling 50-pound bags of rice and flour and refilling boxes on the tables as needed.

Once a food bag was full, it was delivered by a “runner” to others manning one of 16 scales; their job was to make sure each bag weighed between 389 and 394 grams. One of those working the scales was Cathedral fourth-grader Nora McCann, who added or took away spoonfuls of rice as needed.

“I think making 10,000 meals is an astonishing thing that we accomplished,” Nora said. She added that she loved “the teamwork that each person put in.”

Woy, in his third year as Cathedral rector, said, “Things like this build up the parish. Whether they are here because of confirmation service hours or here because you just want to serve and help the poor, it builds up a sense of community.”

Cathedral middle-school students not only packaged all those meals, but they will sample them, too. As part of the school’s Lenten luncheon program, they will be eating the CRS Helping Hands meal as their lunch April 12, Wednesday of Holy Week.

In his own words: A conversation with Bishop Denis J. Madden

The Litany of Trust: A Prayer for our Times