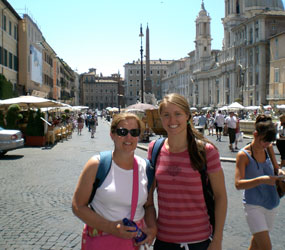 There are days when Elizabeth Pelton laments rising before 5 a.m. to train or the necessity of using Skype to have her father join family dinners in Ruxton, but those sacrifices all seem worth it this week.

Pelton, 17, home-schooled and a parishioner of the Cathedral of Mary Our Queen in Homeland, is in Shanghai, China, representing the United States in swimming’s FINA World Championships July 24-31, the sport’s last major international event before the 2012 Summer Olympics in London.

She’s guided by the support of her parents, Greg and Anne; the direction of Bob Bowman, the North Baltimore Aquatic Club coach who helped make Michael Phelps the winner of the most gold medals in Olympic history, and the faith that bolsters her solid grounding.

“Regardless of how tough things are, you have to take a step back,” Pelton said after a morning practice in late June at the Meadowbrook Aquatic and Fitness Center off Falls Road. “Relax, step back, He is there.”

That awareness of God’s presence is vital in a sport that does not stop for the Sabbath. Swim meets consist of evening finals and morning preliminaries, and Sunday Mass is sometimes missed.

“I try to make it up when I go home,” Pelton said. “My sister Mary had class Mass a couple of times a month in the Cathedral. I would see Will (her younger brother) every once in a while there, too.”

Like her younger siblings, Mary and Will, who also swim for NBAC, Pelton attended the School of the Cathedral of Mary Our Queen. Her older brother, Greg, a rising junior at Harvard University, graduated from Loyola Blakefield.

The Pelton children had attended St. Thomas Aquinas School in Fairfield, Conn., before the family relocated to Baltimore in 2006. After Elizabeth set a national age-group record for girls in the 50-meter backstroke, her parents searched for better training situations.

“We kind of dove into it, not knowing exactly what we were getting into,” said Anne Pelton, Elizabeth’s mother. “What we needed for Elizabeth, we couldn’t find (in Connecticut). If you’re going to go, go to the best in the country.”

As Elizabeth’s international credentials grew and training and meets took her everywhere from Colorado Springs, Colo., to the Gold Coast of Australia, the wisdom of home-schooling became apparent.

Her father, a research psychiatrist at Columbia University Medical Center, is in Manhattan during the workweek, but always a social network click or two away to help with her studies, which are aided by all those stamps in her passport.

“I have a list of all the places I’ve been,” Pelton said, “and a map in the kitchen, with little pins.”

In 2009, at age 15, Pelton made her debut on the U.S. Senior National team at the world championships, in Rome. Her older brother, Greg, pulled out of a major U.S. meet to join their parents and watch her place sixth in the 200 backstroke.

During their stay in Rome, the family visited the Vatican, and Pelton’s mother also trekked to St. Peter’s Basilica for Sunday Mass, calling it “the most wonderful experience I had in Rome.”

“One of the things we’ve done with Elizabeth’s home-schooling is to incorporate the travel into her education,” Anne Pelton said. “She’s been to Stockholm, Berlin, experiencing different food, language. She’s basically seeing the world.”

When you are a club teammate of with Phelps, that means a private tour of the Louvre and Eiffel Tower after a meet in Paris. Her education is thriving, to the point where she has accepted a scholarship to enter the University of California Berkeley in fall 2012, just after the Summer Olympics.

Bowman, her coach, noted the “meticulous nature and consistent work ethic” that have helped her become the third-fastest American woman ever in the 200 backstroke. She averages more than 31 miles a week of training in the pool, but isn’t quite as observant on the road.

“I don’t have my driver’s license,” Pelton said. “This past year, I gained an appreciation for how much my Mom has to drive.”