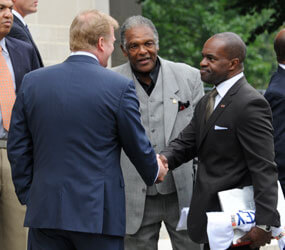 As winter snow lay on the ground, two horses pulled a carriage to the front of the Cathedral of Mary Our Queen in Homeland Jan. 19. They carried the flag-draped coffin of William H. Torbit Jr., a Baltimore City police officer who was shot and killed several days earlier and whose life was to be memorialized by friends and family inside the cathedral.

Only three days later, firefighters from across the country converged on the massive North Baltimore church. Mark Falkenhan, a Middle River native who lost his life battling a blaze with the Lutherville Volunteer Fire Company, was touted for his selfless sacrifice.

Last week, legendary Baltimore Colts – Artie Donovan, Lenny Moore, Bruce Laird, Tom Matte and others – gathered inside the cathedral to honor another citizen: Hall of Fame tight end John Mackey, the man who fought for players’ rights and who lost his life after a battle with frontotemporal dementia.

None of the three men whose lives were celebrated at the cathedral was Catholic. They were laid to rest from the cathedral, however, because the Baltimore landmark has become the place where the city gathers for large liturgical events, both somber and joyful.

Parish leaders believe that providing the building for such important occasions is a natural part of the ministry of a cathedral.

“It’s a wonderful role that we have – being so visible in the community and being able to serve as a gathering space not just for our community of faith, but for the whole city,” said Monsignor J. Bruce Jarboe, cathedral rector.

With a seating capacity of 1,800, the cathedral is one of the largest churches in the region. It also has a large parking capacity and is well situated near major thoroughfares.

The cathedral staff has a long history of working closely with public safety officials in planning large-scale events, and the archdiocesan communication staff coordinates media coverage so the wishes of the family are honored and liturgies are celebrated in a respectful manner.

Baltimore City Fire Chief James S. Clack said the cathedral “becomes our public safety community” when a firefighter or police officer is killed in the line of duty.

“Entering into the cathedral is a spiritual experience where one feels the sense of God’s presence,” said Clack, who also serves as a deacon at Sacred Heart of Jesus in Highlandtown.

“It is a holy space where we all can remind ourselves that we were all born to love God and love one another,” he said.

Clack noted that the funerals he has attended at the cathedral have been “very ecumenical.”

“The parish and archdiocesan staff are very open to the wishes of the family and the wider public safety community when it comes to designing the liturgy,” he said.

“It really is a parish doing ministry with and for fellow citizens in our region,” Monsignor Jarboe explained.

Deacon Ray Moreau, who ministers at the cathedral, said his parish has experience serving people of many faith backgrounds.

“The Episcopal Church and the Lutherans have a different style of liturgy than an Evangelical, Pentecostal or Baptist Church,” he said. “We are pretty well equipped to handle a variety of liturgical traditions.”

The cathedral has twice served as the prayerful setting for the installation of Lutheran bishops – first in 1991, when Bishop George Paul Mocko was installed as bishop of the Delaware-Maryland Synod of the Evangelical Lutheran Church of America, and, again in 2000, when Bishop Henry Gerard Knoche succeeded Bishop Mocko.

The stately building, whose limestone walls and soaring architecture are a familiar presence to Baltimoreans, is the site for community prayer services, Boy Scout events, musical concerts and other inter-faith and ecumenical celebrations.

Monsignor Jarboe sees the cathedral’s wider outreach as a form of evangelization.