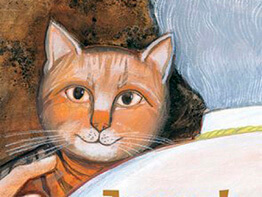 Chico the cat thinks he is in the “purrfect” position to tell children the story of how one of his best friends became Pope Benedict XVI.

The cat’s tale is confirmed, at least as far as the facts of the papal biography go, by Monsignor Georg Ganswein, Pope Benedict’s personal secretary and the author of the preface to the Italian children’s book, “Joseph and Chico: A Cat Recounts the Life of Pope Benedict XVI.”

A spokeswoman for the Conventual Franciscans’ Edizioni Messaggero Padova, the book’s publisher, said they expect to find translators and foreign publishers for the book at the mid-October International Frankfurt Book Fair in Germany.

In his preface, Monsignor Ganswein wrote to young readers, “It’s not every day that a cat considers the Holy Father his friend and sits down to write his story.”

Having served first as secretary to Cardinal Joseph Ratzinger, then as his secretary after he became pope, Monsignor Ganswein assured readers that he knows Pope Benedict well and that the words author Jeanne Perego puts into the mouth of Chico – between a few meows – are “all true and interesting.”
The papal secretary said he shares Chico’s opinion that “the Holy Father is a special person,” especially because “he is a sincere friend of Jesus.”

Chico, a ginger tabby, said he met the future pope in Pentling, Germany, a town near Regensburg where the pope and his brother have a house. Chico officially belonged to the neighbors, but said he was welcome in the Ratzinger house.

Chico would rub up against the pope’s legs, curl up in his lap, watch and listen, which is how he came to know the details of the pope’s biography.
While the future pope and his brother were teenagers preparing for the priesthood, “in Germany the tragedy that would shake the world unfolded. I am speaking of Nazism, one of the most dramatic and shameful moments of human history,” the cat wrote.

“Joseph was forced to do something that absolutely went against his will: enter the army and leave for war,” he said.

The young Ratzinger was assigned to a unit defending a factory that made airplane motors and then was sent to prepare bunkers against a possible tank attack.

As the book ends, Chico said he watched coverage of the 2005 death of Pope John Paul II and the conclave on television.

“In my house, we were all deliriously happy” when it was announced to the world that Cardinal Ratzinger had been elected pope.

“I was so excited that I forgot to demand my dinner,” he said.

“Now Joseph Ratzinger is not just my friend, but also the great friend and guide of all Catholics,” he said.