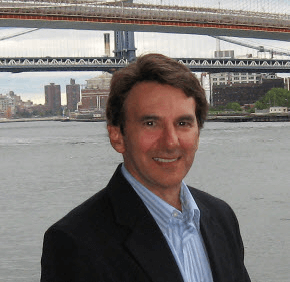 Question: What were some influences on the man who produces a family-friendly comic strip that is syndicated in the Baltimore Sun and some 220 other daily newspapers?

Since 1988, Rick Detorie has regaled fans of the funnies with “One Big Happy,” where the puns of Nick match the malaprops of his granddaughter, Ruthie, whose nuclear family is never on the verge of blowing up.

A native Baltimorean who resides in Venice Beach, Calif., Detorie attended the parish school and received his sacraments at St. Thomas Aquinas in Hampden, where his mother, Genevieve, remains a parishioner and faithfully clips every one of his daily strips.

Detorie – pronounced DEE-tor-ee – is a 1970 graduate of Loyola Blakefield in Towson.

The most recent of his nearly three dozen humor books, “The Accidental Genius of Weasel High,” is dedicated to educators in general and specifically to Michael Iampieri, who “fueled my interest in the creative arts and has been a constant source of inspiration since that very first day of Art Class1-A at Loyola.”

That was in 1966, when Detorie was a Loyola freshman and Iampieri a first-year teacher.

“Two teachers encouraged my craziness,” Detorie said. “(Jesuit) Brother Paul Cawthorne, an English teacher, once read aloud an essay I had written, citing it as an example of fine writing. That gave my confidence a boost. Iampieri always got my brand of humor.”

Retired after 41 years of teaching at Loyola Blakefield, Iampieri said “Rick was an exceptional artist even back then.”

Detorie grew up in Medfield, where he lived with his parents and younger sisters, Terry and Sandy, next door to his paternal grandparents, Nick and Theresa. Ruthie was modeled after both his sisters, he said, “but morphed into her own unique character.”

Other inspiration came from the character played by Morey Amsterdam on “The Dick Van Dyke Show,” back-alley hikes to and from school and regular visits to the tiny Enoch Pratt Free Library branch in Hampden, where the humor section had three collections: Peanuts, Dennis the Menace and Charles Addams.

“I pored over each one,” Detorie says.

Detorie cites Foghorn Leghorn as his favorite cartoon character. In the heyday of Warner Bros., Foghorn, Bugs Bunny and the gang were painstakingly drawn on individual frames. Decidedly old school, Detorie doesn’t even use a computer on his word balloons, penciling in even those.

Besides the aforementioned Groucho, he quotes Mark Twain. Asked about his penchant for wordplay, Detorie says, “In many ways, I still think like a kid.”

A tyke’s take on Adam and Eve, the Bible and Sunday School are found in “One Big Happy.”

“I may not put specific Catholic references in the strip, but the influence is there,” Detorie said. “Catholicism is inextricably linked with my childhood, which I often channel for its innocence, passion and humor.”