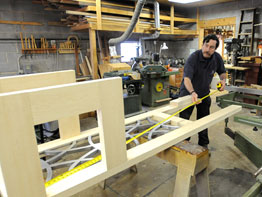 For Deacon Dave Cahoon, working at his St. Joseph’s Carpentry Shop on a quiet country road in Poolesville MD, this year’s Holy Week was one like no other.

With a hammer and chisel, the carpenter worked on a long maple board for the base of the altar that Pope Benedict XVI will use for his April 17 Mass at Nationals Park in Washington.

“This is an awesome job to have,” said Deacon Cahoon, who has worked as a carpenter for nearly three decades, fashioning many church and home furnishings over the years at his shop, which includes a sawmill.

“I can take it from a tree to the finished product,” he said in an interview with the Catholic Standard, newspaper of the Washington Archdiocese.

The day before Holy Thursday, he picked up the metalwork for the altar, which was designed by two Catholic University of America graduate students, John-Paul Mikolajczyk and Ryan Mullen. They also designed the papal chair and the ambo that will be used at the Mass.

Deacon Cahoon graduated from Good Counsel High School in Wheaton in 1974, in the same class as Greg Campbell, an artist and blacksmith who oversaw the production and completion of the altar’s ornate metal framework.

“It’s gonna look awesome,” said Deacon Cahoon, who has completed dozens of carpentry jobs for the Archdiocese of Washington, including building the mobile altar used for the Mass for Life that follows a youth rally each January at the Verizon Center sports arena in downtown Washington.

Working on the papal altar “is the highlight of my craft. It’s all gonna be downhill from here,” the carpenter said.

Nearby, the ambo for the papal Mass and the papal chair, also crafted in maple by Deacon Cahoon, were nearly complete. “I’m gonna have hundreds of hours (invested) in this thing. On a project like this, you really work on one piece at a time,” he said.

Later, he smiled when contemplating the tight deadline for building the furniture for the papal Mass. “One day late won’t make it!” he said, laughing.

The year after Pope John Paul II visited Washington in 1979, Dave Cahoon had been offered a job at the National Institutes of Health after doing graduate work in physics at Catholic University. To help pay for his education, he had been doing carpentry during his summers between classes.

“I realized I really enjoyed carpentry,” he said of the profession he took up. Growing up in St. Mary’s Parish in Rockville, he had taken the confirmation name of Joseph, and when he opened a carpentry shop, he named it after St. Joseph, a carpenter who became the patron saint of carpenters.

“Here was a patron saint, working behind the scenes in my life,” he said. “I had always liked woodworking, but I never thought of it as a career.”

Deacon Cahoon and his wife, Rani, have two grown daughters, Casey and Jessie.

Ordained a deacon in 1991, he serves at St. Mary’s Church in Barnesville; he built the new altar there. “I get to kneel quite regularly (there) at my altar,” he said.

He confessed that he was distracted at this year’s Mass for Life at the Verizon Center. The priest was giving “an awesome homily,” he said, “and I was looking at the ambo, thinking, ‘I remember when that was in my shop.’“

But when Pope Benedict XVI celebrates Mass on April 17 for more than 45,000 people and uses the altar that Deacon Cahoon helped build, the carpenter said, “it’ll be a blessing,” one the craftsman and deacon will never forget.