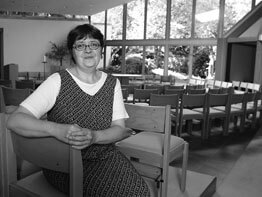 Sister Monika Bies, 41, first felt called at 18, “but that sort of came and went,” she said with a laugh.

She carved out a thoroughly modern life in her native Germany, studying political economics and then working for the German government and the United Nations. She lived in different cities and was in a relationship with a significant guy. Her two brothers married and had children.

Yet she felt a deeper yearning – for prayer, for community, for a life dedicated to God.

“It was hard because I enjoyed my job and I had a relationship,” she said. “But this is so much who I am and who I want to really become more and more.”

“This” filled her with joy last Sunday, when she took her final vows as a Carmelite. The Carmelites were once a cloistered order, behind the grill. Today, they leave the tranquil monastery to get a haircut or see a doctor, but they still live a life focused on prayer and community.

Sister Monika’s journey from Luxemburg, Germany to the Carmelite Monastery in Towson began when she asked a German priest about a community, and he steered her toward the Franciscans here. She came in 1999, volunteered at the Franciscan Center and was moved by the poverty she saw in Baltimore.

“That really touched my heart, it touched me deeply, those struggling and those who minister to them,” she said. “I also remember that I really felt drawn to more prayer and more community life.”

A sister from Germany who was studying at Loyola University in Maryland invited her to come to Mass at the Carmelite Monastery, “and I thought, ‘Why not?’ ” Sister Monika recalled with a laugh. “I went with her to the Sunday liturgy and I realized I really loved it. They really love each other, they respect each other and they have this sense of community.”

She can’t quite explain why she then entered the Benedictine order. She stayed there for nine months, but then happened to come to the wake of a Carmelite sister, “a sister I hadn’t really known. I just remember that I came into the chapel and I had this deep sense of belonging … From the moment I stepped into the chapel I knew this was it; I was deeply happy, but I thought, ‘oh my gosh.’ ” She sweated about telling the Benedictines, “but I knew I really had to be here.”

The Carmelite sense of community embraces the nearby community, too; area residents attend Mass at the monastery and often call or stop by to ask for the sisters’ prayers. They share the joy of those in formation. “My family couldn’t come,” Sister Monika said, “but a lot in the congregation are close to us.”

Her days as a Carmelite with 17 sisters won’t be much different than her six years in formation. Unlike other orders, where you enter is where you’ll stay.

The day begins with lauds at 7:30 a.m. and Mass at 8. Then come the everyday tasks of cleaning and gardening, answering phones and letters or preparing liturgies. They pray again at 11:45 a.m., and eat their main meal at noon. In the afternoon, they might have a class on St. John of the Cross or Theresa of Avila, or provide spiritual direction. Vespers at 5 p.m. are followed by a light supper, and then the sisters gather to watch the evening news.

“We feel it’s very important to stay connected,” Sister Monika says. “After news we go to Vigil, and then it’s really quiet in the house until lauds.”
Her former life, she says, “was good, but this life is a great life. It’s just very special – it’s just really grace-filled … it’s a big step but I’m not doing this alone.”