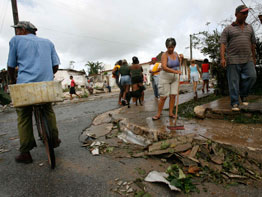 HAVANA – Church officials are working to deliver aid to the western Cuban province of Pinar del Rio, one of the areas hardest hit when Hurricane Gustav struck Cuba.

Maritza Sanchez, director of Caritas Cuba, told Catholic News Service that arrangements were being made with the Cuban government to channel humanitarian aid from the Catholic Church in Germany and the United States to victims of the hurricane. More than 190,000 people were evacuated from the region before the hurricane struck Aug. 30.

“Through parishes, we are already delivering food, clothing and personal hygiene articles to those in greatest need, and we are trying to make purchases in the retail network with funds that have been donated to us,” said Ms. Sanchez, who traveled to Pinar del Rio.

Caritas Cuba is the local affiliate of Caritas Internationalis, the church’s umbrella organization for Catholic aid agencies. The church also is trying to ensure that in sending aid foreign Catholic Church organizations give priority to food and material for repairing roofs.

Ms. Sanchez said that Caritas workers in Havana can “help up to 10,000 families who have lost their homes.”

Parishes in Havana and on other parts of the island nation are taking up collections for people who were displaced or lost property because of the hurricane, which is said to be the strongest in 50 years to have struck the western regions of Pinar del Rio and Isla de la Juventud. More than 100,000 Cuban homes were damaged or destroyed.

“We are collecting food, clothing, utensils, personal hygiene articles, anything that can help the victims, who have all kinds of needs,” said a parish priest.

Cuban officials reported that there were no deaths, but that 19 people were injured. All have been released from hospitals.

The Cuban government reported that it will continue to tally the damage to homes, crops and the infrastructure caused by Gustav. Although no total damage estimate was available, official sources said that all sectors in Pinar del Rio and Isla de la Juventud were affected by the high winds of nearly 150 mph.

Hurricane Ike, which was traveling through the Atlantic Ocean Sept. 5, was projected to hit northern Cuba Sept. 7 or 8.