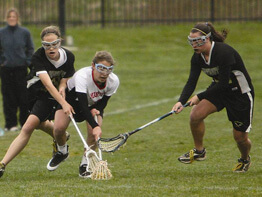 With only two one-goal losses on the season, the John Carroll Patriots are making their mark on the girls’ Interscholastic Athletic Association of Maryland’s A Conference lacrosse league.

Posting a 7-2 league record (8-2 overall), the Lady Pats are under the direction of head coach Krystin Porcella, a 1994 John Carroll School, Bel Air, grad, who is pleased with their season thus far.

“I came on board three seasons ago, and the program has continued to build. Those freshmen three seasons ago are now our core group of juniors, and they are leading our team,” said Porcella.

The team’s foundation lies in their heightened level of physical conditioning. With many of JC’s team members playing fall soccer, field hockey and year-round club sports, the lacrosse team shows up in early March to begin the spring season in tiptop shape. Made up of sprinters peppered with true endurance athletes, the Lady Patriots will run their opponents up and down the field without missing a beat.

On offense, the team is led by two juniors, team captain Allyson Carey and Casey Ancarrow, both combining for close to 50 goals on the year. Both Carey and Ancarrow possess excellent stick skills and run hard at their opponents.

The defensive team of senior Kaitlin Gambrell, sophomore Jen Zoltoski and junior Anne Brockmeyer has held the competition to under 80 goals thus far. Gambrell has emerged as the defensive team leader while Zoltoski will usually draw the toughest defensive assignment with quick feet, an eye for the ball and a competitive spirit.

“(Junior Ali Luogno) is a constant factor coming off of the bench for us,” said Porcella. “She gets in there and gets the job done.”

Big wins early in the season over perennial powerhouses St. Paul’s School for Girls, Brooklandville, 10-8, and St. Mary’s Annapolis, 10-9, are serving as highlights on the season. On the flip side, the Patriots lost to second place Bryn Mawr School, Baltimore, by only one goal and have yet to face undefeated McDonogh School, Owings Mills.
The IAAM Lacrosse Championship finals will be held May 13 at Loyola College in Maryland, Baltimore.