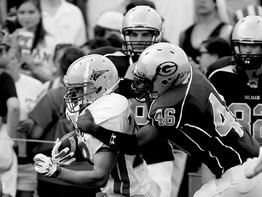 Calvert Hall College High School’s head football coach, Donald Davis, has his work cut out for him as he continues to challenge and change the mindset of his players and those associated with the Towson football program. Bottom line: They need to believe that they can win football games.

As the 88th meeting of Loyola Blakefield, Towson, and Calvert Hall draws near and the Turkey Bowl becomes the talk of local sports radio, Internet blogs, football enthusiasts, alumni and students, Calvert Hall’s Coach Davis remains true to his promise to himself, the school and his players – and that is to believe in themselves.

“I know that we prepare our kids in such a way that they are given everything they need to win,” said Davis, whose club is now 1-3 on the season in the MIAA A Conference. The Cards are now tied for fourth place with Georgetown Prep and Gilman.

“Our fans have to believe and our players have to believe,” said Davis. “I know that I believe that we can win football games, or I wouldn’t be coaching this team.”
There’s no doubt that the Cardinals program is experiencing growing pains. There is tremendous pressure to turn this ship around and become top contenders like Loyola, McDonogh and now Mount St. Joseph High School, but it will take time.
Davis praises the work of Mount St. Joe’s team and the work and patience of varsity head coach Chip Armstrong, who has weathered his own growing pains over the years. But now, after stringing together a three-year run of top-level junior varsity programs, the Gaels’ full program is heading in a direction that shows promise and provides a real presence at the top.

For Calvert Hall, Davis said, “Our kids are learning a lot about themselves and the coaching staff, and we, in turn, are learning about each other.”

Davis went on to say, “I can tell you this; I see positive signs all the time over these last three months. I can feel the shift, and I believe in what we have and where we are going.”

The Cards defensive line is a bright spot in the program and is led by seniors Justin Strickland and Ryan Griffiths.

And while the Loyola Dons’ match-up with the Cardinals is slightly more athletic, the Cards know that anything can happen in football on any given day. “We will have to play a mistake-free football game,” said Davis. “But I do believe that we have a real chance to win.”

The Cardinals are coming off of an impressive 37-0 win over St. Vincent Pallotti, Laurel, Nov. 2. “It was great. Everyone got to play, the seniors are packing in the memories, and for me, I love to look in my players’ eyes after those kinds of wins,” said Davis.