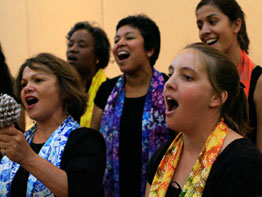 WASHINGTON – Two Catholic cardinals called the current U.S. immigration situation “a terrible crisis” and “a dark moment in our nation’s history” in remarks they made July 28 at the opening Mass and plenary session of the 2008 National Migration Conference.

Both Cardinal Theodore E. McCarrick, retired archbishop of Washington, and Cardinal Roger M. Mahony of Los Angeles urged participants to hold on to hope in their work with immigrants for local and national church agencies.

The July 28-31 conference attended by more than 850 people was co-sponsored by the U.S. Conference of Catholic Bishops, the Catholic Legal Immigration Network, Catholic Charities USA and Catholic Relief Services.

Much of the agenda, built around the theme “Renewing Hope, Seeking Justice,” reflected the struggles faced by those who work with immigrants.

Workshops were scheduled on topics such as “How to respond to federal raids,” “Identifying and supporting survivors of traumatic events,” “A Catholic response to human trafficking” and “Parenting challenges from an African immigrant perspective.”

Another two dozen workshop sessions dealt with legal issues including “Filing waivers of inadmissibility” and “Immigration law and crimes”; strategies for fundraising; and getting out the church’s message on immigration.

“I see our challenge as one of shouting out the message of the Gospel, the words of the holy fathers, the unchanging teaching of the church, and in the profound conviction of our nation’s history that the real heart of America has not changed, that its willingness to right a wrong has not faulted, that it needs only continuous courage, unwavering confidence in the goodness of people and a trust in God’s love for the poor and the stranger,” said Cardinal McCarrick in his homily July 28.

Drawing from the Gospel reading of the parable of the mustard seed, Cardinal McCarrick said the story is full of optimism “that the kingdom of heaven itself can be sown in men’s hearts like a seed.”

The sowing of seeds is a theme in many of Jesus’ parables, he noted, with one important lesson that the seed is the word of God.

He said that lesson “is often lost because of the hardness of men’s hearts, the timidity of their belief and the temptations of the world, which sometimes allure them into political positions which they know in their hearts are wrong, since they do not conform to the loving providence of God.”

Cardinal Mahony more directly took on the failure of Congress to pass comprehensive immigration reform legislation and the federal enforcement policies that have led to “the separation of families, the harassment and profiling of U.S. citizens and legal residents, the expanded use of detention against those who are not a flight risk or a danger and, tragically, deaths in the United States desert.”

The recent national policy described as “deportation by attrition” has a goal of creating “such a dangerous and unwelcoming atmosphere that immigrants and their families leave the United States because they have no other choice,” said Cardinal Mahony.

It has led to fear among immigrant communities and a hostile atmosphere, “fanning the flames of intolerance, xenophobia and, at times, bigotry,” he continued.

“Such a national policy is doomed to fail because it underestimates the human spirit, the spirit of hope that we celebrate in this gathering,” the cardinal said.

The very act of migration is a hopeful one, he said, because it is based in the belief that a better life is possible for the migrant and his family.

He encouraged conference attendees to consider the call to hope expressed by Pope Benedict XVI in the encyclical “Spe Salvi” (“Saved by Hope”).

Hope “gives us the courage to place ourselves on the side of the good even in seemingly hopeless situations, aware that, as far as the external course of history is concerned, the power of sin will continue to be a terrible presence,” the encyclical said.

Cardinal Mahony said that, “despite the attacks on our position and on those we serve, we must not lose faith as to the rightness of our cause and of our service to our immigrant brothers and sisters. The church must remain a prophetic voice in an increasingly hostile wilderness, defending her mandate, given by Christ, to welcome the stranger.”

He outlined some suggestions for the church to work to change the current situation, including continuing to reach out and support immigrants; holding elected officials accountable by insisting on a human approach to immigrants; changing attitudes toward migrants through education; and working to reform immigration laws.

“While we are bound to respect our laws and not violate them, we also are bound to correct unjust laws,” Cardinal Mahony said. “The terms ‘rule of law’ and ‘national security’ should no longer be used to justify the harsh and inhumane treatment of immigrants, refugees or asylum seekers. While we acknowledge the right and the need for our government to enforce the law, we must remind our fellow Americans that man-made law does not permit the violation of God’s law.”