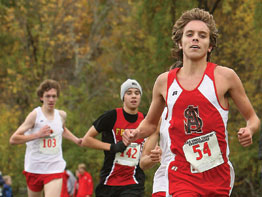 The Calvert Hall College High School Cardinals plowed through two big events last week, capturing the MIAA A Conference cross country title and then, on three days of rest, moved on to comfortably walk away with the state private schools title.

Expect nothing less from a team who went undefeated (8-0) in the regular season, as the Towson Cardinals and Randy Fowler, head coach, are in it for the long haul with depth in numbers, an abundance of talent and serious perseverance.

The Cardinals’ fall-season cross country program has been ranked first in the Metro Prep poll since the preseason. Not reaching a conference title honor since the 1999 season, the Cardinals knew after losing to Loyola Blakefield, Towson, by one point in 2006 that they were going to return stronger and faster.

And that they did. On Nov. 7, Calvert Hall’s top seven varsity runners gathered around the starting line at Oregon Ridge Park awaiting the sound of the start gun. While spectators stood along the course line in jackets and hats to fend off chilling temperatures, the Cardinals kept their legs moving and upper bodies loose, quietly focusing on where and when to make their move along the course route.

A stellar individual performance by Archbishop Spalding, Severn, junior Zach Sullivan with a time of 16:01 gave the Cardinals something to worry about; but cross country coaches will tell you that you’re only as good as your fourth and fifth-place runners – they win races for teams.
Calvert Hall’s top five did not disappoint. The Cards’ one-two punch of Tony Rowe (16:15) and Chris Swisko (16:21) finished second and third in the race, behind Sullivan, but it was the ninth-place finish of Trent Seawell (16:54), 10th-place finish of John Fitzgerald (16:55) and 14th-place finish from Ryan Holleran (17:14) that combined for the low score of 38 points.

Three days later, the Calvert Hall team impressed again, this time at Glenelg Country School for a regional competition among area private high schools. The outcome was another first-place victory for this talented and competitive Calvert Hall team. This time, add Logan Pasqual to the mix, finishing 15th with a time of 17:15.37. Along with Pasqual were Rowe (16:18.37), Swisko (16:39.11), Fitzgerald (17:00.44) and Holleran (17:17.10), combining for 51 total points and the honor of being called state champions.