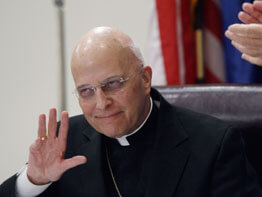 Using an electronic voting system, the bishops voted on the second day of their Nov. 12-15 fall general meeting in Baltimore.

He succeeds Bishop William S. Skylstad of Spokane, Wash., whose three-year term comes to an end at the close of the meeting.

After a president was chosen from among the 10 candidates, the remaining nine became the slate of candidates for vice president.

There were three rounds of voting for vice president. Two votes included all nine remaining candidates and the third vote was between the top two: Bishop Kicanas and Archbishop Dolan. Bishop Kicanas won with 128 votes; the archbishop received 106.

Cardinal George has been archbishop of Chicago since 1997. He was made a cardinal in 1998. He first became a bishop when he was named to head the Diocese of Yakima, Wash., in 1990. He then was head of the Portland Archdiocese from 1996 until his appointment to Chicago.

Bishop Kicanas, who was elected conference secretary by the bishops in November 2006, has been the head of the Diocese of Tucson since March 2003.

He was an auxiliary bishop of Chicago from March 1995 until he became coadjutor bishop of Tucson in January 2002. In March 2003, he succeeded Bishop Manuel D. Moreno, who retired at age 73, citing ill health. Bishop Moreno died in November 2006. Bishop Kicanas is a former chairman of the USCCB communications committee.

The bishops also voted on treasurer-elect and 10 committee chairmen and chairmen-elect:

– Archbishop Kurtz won as treasurer-elect with 163 votes. The other candidate was Bishop Michael J. Bransfield of Wheeling-Charleston, W.Va., who received 71 votes.

– For the Committee on Cultural Diversity in the Church, Archbishop Jose H. Gomez of San Antonio was elected chairman with 131 votes, over Bishop Richard J. Garcia of Monterey, Calif., who received 101.

– For the Committee on National Collections, Archbishop John G. Vlazny of Portland, Ore., was elected chairman with 148 votes, over Bishop Ronald P. Herzog of Alexandria, La., who received 85.