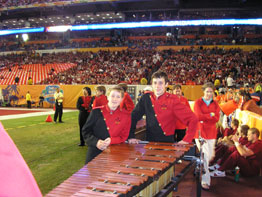 Whether it’s winning a 2008 Maryland state title, performing on Main Street at Disney World or at the yearly Turkey Bowl on the field of M&T Bank Stadium, his group rarely disappoints.

Still, he didn’t know how they would react to playing in front of a sold-out crowd of the Jan. 8 Bowl Championship Series Championship Game at Miami’s Dolphin Stadium or in a national competition a day earlier.

In the end, the Cardinals rocked the Sunshine State.

The Towson school band claimed the Jan. 7 Band Championship Series and earned a right to perform in a solo spotlight performance before the football game between the University of Florida and Oklahoma University.

“They were so super excited,” Mr. Ecton said of their reaction to winning the four-band competition. “They were jumping up and down. It was really unexpected.”

Like the two teams playing in the main attraction, Calvert Hall had a break in schedule since their last performance at Thanksgiving’s Turkey Bowl with Loyola Blakefield, Towson.

“This is the first time I’ve flown with a group,” he said. “They were very respectful and well-behaved the entire time. I think other schools picked up how disciplined our students were. Winning it was just a nice prize.”

Calvert Hall’s signature show, “Facing Our Fears,” made use of each of the 59 attending members of the band. The show, designed in-house by Mr. Ecton and his staff, was used during the competition and pre-game ceremony.

In order to make the $200,000 trip, the band raised funds by selling pizza, cookie dough and raffle tickets, and they ran car washes.

“We sold everything under the sun,” Mr. Ecton said with a laugh.

The group performed with the other national high school bands during halftime.

Mr. Ecton added that Calvert Hall’s pre-game performance announcement could be heard over the television broadcast on FOX.

As his band walked out on to the field before the game, they saw mostly a sea of blue-clad Florida fans dominating a crowd of 70,000. They knew they had arrived at the big time.

“This has been one of our best years ever,” Mr. Ecton said. “We’d love to keep this tradition going.”