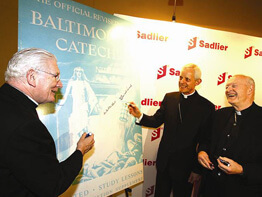 Like thousands of other American Catholics of his generation, Cardinal William H. Keeler knows why God made him.

“To know, love and serve him,” Cardinal Keeler told The Catholic Review, paraphrasing the often-repeated answer he memorized as a child from the famous Baltimore Catechism.

The familiar passage from the catechism is just one of many standardized responses the thick primer offered on questions related to doctrine, morality and all things Catholic.

The Baltimore Catechism was mandated by the American bishops who met at the Basilica of the National Shrine of the Assumption of the Blessed Virgin Mary in Baltimore during the Third Plenary Council of Baltimore in 1884. It was used by schools and parishes to help Catholics of all ages learn their faith until the book’s strict question-and-answer format fell out of favor in the mid-1960s.

The Vatican later released The Catechism of the Catholic Church in 1994, which now serves as an important source for religious education in the United States and around the world.

In a nod to the historic significance of the Baltimore Catechism, Cardinal Keeler joined Cardinal Theodore McCarrick, retired archbishop of Washington, D.C.; and Archbishop Donald Wuerl of Washington, D.C. in signing two large cover reproductions of early editions of the text April 11.
The event was held at the Baltimore Marriott Waterfront Hotel in Harbor East during a breakfast marking the 175th anniversary of William H. Sadlier, Inc., one of the publishers of the Baltimore Catechism. The celebration was part of the National Catholic Educational Association convention that met in Baltimore April 10-13.

“We used the catechism right from the beginning all the way through high school,” said Cardinal Keeler, noting that nuns exposed him to the book.
“It was also used throughout the English-speaking world – in Africa, in Asia,” the 76-year-old prelate said. “It meant something for those people too.”

Like Cardinal Keeler, Cardinal McCarrick told The Catholic Review he also studied the Baltimore Catechism. The book’s users depended on rote memory to learn the answers, he said.

“The strength of it is that it stayed with you,” said Cardinal McCarrick, who, at 77, can still recite passages from the catechism.

“The weakness of it was that sometimes you didn’t always understand what you memorized,” he said.

In a swing away from the doctrinal focus of the Baltimore Cathechism, many religion textbooks of the 1970s and 80s often focused more on God’s love.

“It has to come together,” Cardinal McCarrick said. “You can’t have one without the other; otherwise you have a skewed vision of life because life is love put into practice. Love has to spring from truth.”

William S. Dinger, president of Sadlier, Inc., said the question-and-answer format of the Baltimore Catechism was “right” for the times it was used. Modern textbooks now attempt to teach children about the faith and encourage them to apply the faith to their lives in age-appropriate ways, he said.

“I think memorization is important, but understanding is important too,” he said. “If you understand the faith you will be able to defend it.”