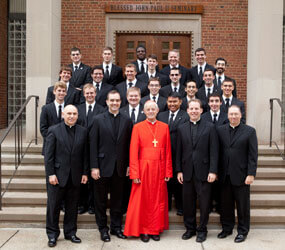 Cardinal Wuerl prayed that God will “bless this house and all who study here so that the vision, the dream and the legacy of Blessed John Paul II will long continue at the service of God’s holy church.”

He encouraged the seminarians to look to their patron for guidance and inspiration as they study for the priesthood. The first group of 20 seminarians now call Blessed John Paul II Seminary home, and many assisted at the Mass, serving at the altar, singing in the choir and afterward giving tours of the seminary.

Currently, 72 men are studying for the priesthood for the Washington Archdiocese, including the Blessed John Paul II seminarians taking classes at the nearby Catholic University of America. Monsignor Robert Panke, the new seminary’s rector, was among the concelebrants at the dedication Mass.

Recalling Pope John Paul II’s installation Mass on that day 33 years earlier, Cardinal Wuerl, who was present that day, said the new pope’s words still echo today in the hearts of the world’s Catholics: “Open wide your hearts to Christ. Do not be afraid. Christ is with us. He is risen. He is with us.”

The cardinal noted “how appropriate it is that this seminary would bear his name,” the name of a pope who presided over the Catholic Church for 26 years, offering an example of charity and a body of teaching that has inspired generations of Catholics. He said in a special way, the men trained at the seminary named in the late pope’s honor would continue his work.

“The men who will be formed here are preparing to be priests of this millennium, the agents of the Holy Spirit renewing the face of the earth and the voice of the new evangelization calling all people near and far to embrace the Lord Jesus,” Cardinal Wuerl said in his homily.

Tangible reminders of Blessed John Paul’s life and legacy abound at the seminary. His name graces its entranceway, and a portrait of him painted by Pittsburgh artist Robert Daley is displayed at the chapel’s entranceway. Inside the chapel is a liturgical vestment worn by Blessed John Paul when he celebrated Mass.

A reliquary near the chapel’s altar displays a first-class relic, the blood of the late pope that stained the cassock he was wearing when he was shot and critically wounded during an assassination attempt in St. Peter’s Square May 13, 1981.

During the seminary’s dedication Mass, Cardinal Wuerl said that relic serves as a reminder to present and future priests that it is not always easy to take up Jesus’ cross. Afterward, the cardinal said placing the relic in the reliquary provided the most emotional moment in the Mass for him, as a flood of memories returned to him of the pope who ordained him as a bishop 25 years ago. The cardinal was a concelebrant at the May 1 beatification Mass in Rome for the late pope.

The new chapel also connects the seminarians in a special way with Pope Benedict XVI. An apostolic blessing personally signed by that pontiff is on display at the chapel’s entrance, and the chapel’s altar is the one used by Pope Benedict at his 2008 Mass at Nationals Park in Washington.

The cardinal also noted that the ambo used at the papal Mass is also now in the seminary chapel, and “reminds us that it is the word of God that the priest proclaims, it is the teaching of the Church that he announces. His fidelity is to both, because it is not himself that he preaches but Jesus, and Jesus crucified.”

Another aspect of the new seminary’s chapel that ties the church’s past to its present and future is the altar stone, once used by Archbishop John Carroll, who in 1789 became the first Catholic bishop of the United States.

During the dedication Mass, Cardinal Wuerl placed the stone in the altar, anointed the altar with chrism and incensed the altar. Near the beginning of Mass, the cardinal blessed and sprinkled the altar, chapel and seminary with holy water.

The seminary building was originally constructed in 1951 and was first used as a friary for the Franciscan Friars of the Atonement. For much of the past decade, the building housed offices for the archdiocese’s Catholic Standard and El Pregonero newspapers, the Office of Youth Ministry and the Consortium of Catholic Academies.

This past fall, the cardinal announced the formation of the new seminary, and the building was extensively renovated to become the new home for the priests and seminarians of Blessed John Paul II Seminary.