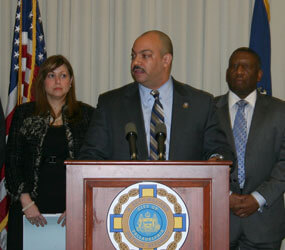 PHILADELPHIA – A new grand jury report has reopened for Catholics the raw wound of sexual abuse of children by clergy and personnel in the Archdiocese of Philadelphia.

While a similar 2005 report detailed hundreds of cases of sexual abuse of children by dozens of clergy over many decades, the new report brings criminal indictments for the first time.

In a statement Feb. 16, Cardinal Justin Rigali of Philadelphia addressed the issue of sexual abuse of children squarely, calling it a crime and “always wrong and always evil.”

“Many people of faith and in the community at large think that the archdiocese does not understand the gravity of child sexual abuse,” he said. “We do. The task before us now is to recognize where we have fallen short and to let our actions speak to our resolve.”

His statement, outlining new actions the archdiocese is taking in response to the report, follows three initiatives he announced Feb. 11, a day after Philadelphia District Attorney Seth Williams held a news conference to release the report by a grand jury investigating alleged abuse.

Charged with rape, assault and other felonies related to minors, as recommended by the grand jury, are former archdiocesan priest Edward V. Avery, 68, of Haverford; Father Charles Engelhardt, 64, of Wyndmoor and a priest Oblate of St. Francis de Sales; an archdiocesan priest, Father James J. Brennan, 47, of Linfield; and former lay teacher, Bernard Shero, 48, of Bristol.

Monsignor William J. Lynn, 60, pastor of St. Joseph Parish in Downingtown, was charged on two counts of endangering the welfare of a child. The charges stem, according to the report, from Monsignor Lynn’s conduct as archdiocesan vicar for clergy from 1992 to 2004. In that role, he was responsible for recommending the assignment of priests in the Archdiocese of Philadelphia.

He is believed to be the only high ranking diocesan official indicted under a criminal statute in the United States for charges related to the sexual abuse scandal that came to light in 2002.

A preliminary hearing for the charges will be held March 7. No trial date has been set.

The new actions Cardinal Rigali outlined in his Feb. 16 statement include the immediate re-examination of cases of 37 priests said by the grand jury to have credible allegations of child sexual abuse against them.

The process will be led by a lawyer and former Philadelphia Assistant District Attorney Gina Maisto Smith. She will personally review all cases of accused priests in active ministry and recommend to Cardinal Rigali procedural changes in response to the report.

Three archdiocesan priests mentioned in the report, Fathers Joseph L. DiGregorio, Joseph J. Gallagher and Stephen B. Perzan, have been placed on leave and they may not exercise their priestly ministry pending the second review of their cases.

First, the archdiocese has rehired Mary Achilles, former victim advocate for Pennsylvania, to advise Cardinal Rigali on how to address the needs of victims of sexual abuse and to review the observations and recommendations of the grand jury report. Achilles served in a similar capacity for the archdiocese from 2006 to 2008.

Second, a new position has been created – delegate for investigations. The person, when hired, will continue the practice of forwarding every allegation of abuse as soon as it is received to the appropriate civil authority.

Regardless of whether the authority investigates the claim, the delegate will lead the archdiocese’s investigation of the allegation from the time it is received until the Archdiocesan Review Board presents its recommendation on the credibility of the allegation to Cardinal Rigali.

Third, Joseph A. Cronin Jr. has been hired as the clergy support associate to help ensure priests in active ministry comply with the “Standards of Ministerial Behavior and Boundaries,” a code of conduct for clergy developed in 2003.

In a new development, on Feb. 14, Cardinals Rigali and Anthony J. Bevilacqua, the retired archbishop of Philadelphia, were named in a lawsuit filed by a 28-year-old unnamed man.

The suit concerns the assignments of two priests who allegedly abused the plaintiff when he was a boy in the early 1990s. Both former archdiocesan priest Martin Satchell and Augustinian priest Richard Cochrane have since been laicized.

The suit also takes to task the archdiocese’s victims assistance program, which allegedly refused to help the victim when he would not sign a waiver authorizing the release of his information to authorities.

Over the Feb. 12-13 weekend, Cardinal Rigali acknowledged in a letter to Catholics the painful, emotional fallout the report and its indictments have left in the archdiocese.

“The release of the Philadelphia grand jury report … brings great sadness and distress to every Catholic, to every person,” the cardinal said. “Once again, the issue of the sexual abuse of minors is raised, as well as the role of the church and her leaders in addressing this abuse. As Catholics, we are hurt and confused, and perhaps even quite angry and feeling betrayed.”

The cardinal acknowledged the suffering of victims of abuse and their families, as well as the suffering of faithful priests. He encouraged Catholics to show victims love and compassion, plus support and prayers for priests.

He called the report’s release “a moment for renewed faith.”

Cardinal Rigali also delivered his remarks as a video message prepared for YouTube.com and aired on many local television and radio stations the same weekend.

At his Feb. 10 news conference, Williams noted that since the 2005 grand jury report, positive changes have resulted in the Philadelphia Archdiocese’s procedures for handling allegations of abuse and its impact upon victims.

“Victims are receiving counseling and support, and the church is reporting some abusers to law enforcement, something that never happened in the past,” he said. “This investigation, in fact, began as a result of reports received from the archdiocese. “

Williams commended the archdiocese for these improvements but emphasized that more needs to be done regarding concerns of victims’ confidentiality and the nature of abuse allegations against priests.

The grand jury’s charges stem from cases in recent years. The report alleges Avery joined Shero and Father Engelhardt in the abuse of a 10-year-old boy from approximately 1998 to 2000. The archdiocese received an allegation concerning Father Engelhardt in 2009 and reported it to the Philadelphia district attorney. His ministry was restricted Feb. 10, 2011.

The archdiocese received a report concerning then-Father Avery that alleged he had inappropriate contact with a minor as far back as 1992. It limited his ministry to chaplain at Nazareth Hospital in Philadelphia from 1993 to 2003. After the archdiocese substantiated allegations of sexual abuse against him and removed him from ministry in 2003, he was laicized in 2006.

New allegations against him were received in 2007 and 2009, which were forwarded to the district attorneys of Delaware County and Philadelphia, respectively.

The charges against Father Brennan, who has been prohibited from performing the duties of a priest or presenting himself as a priest since 2006, stem from an allegation of abuse concerning a 14-year-old boy.