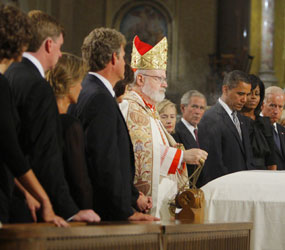 WASHINGTON – In his homily at Sen. Edward Kennedy’s funeral Aug. 29, Father Mark Hession explained the pastoral purpose of the liturgy.

“In the Catholic tradition, the Mass of Christian burial weaves together memory and hope,” said the senator’s Cape Cod, Mass., pastor. “The worship of the church locates us precisely between a past we reverently remember and a future in which we firmly believe.”

As Kennedy’s family mourned, millions of people around the world watched a memorial service Aug. 28 and the next day’s funeral and burial. The latter services included the participation of prominent church leaders, including the archbishop of Boston, yet some critics said the fact that the Massachusetts senator had a Catholic funeral was a scandal to the church.

“Has the potential to be a scandal that will make Notre Dame’s Obama Day a walk in the park,” said an editorial by LifeSite News, a pro-life Web site.

The Catholic Action League of Massachusetts said of the funeral Mass: “This morning’s spectacle is evidence of the corruption which pervades the Catholic Church in the United States.”

Robert Royal, president of the Faith and Reason Institute in Washington, decried the “irreversible” damage to the church from allowing Kennedy a funeral that did not focus attention on his failings, namely his support for legal abortion.

Participating in Kennedy’s funeral rites were two cardinals and priests from at least four dioceses. Cardinal Sean P. O’Malley of Boston presided at the funeral, and Cardinal Theodore E. McCarrick, the retired archbishop of Washington, presided at the burial.

In a Sept. 2 posting on his blog on the archdiocesan Web site, www.bostoncatholic.org, Cardinal O’Malley acknowledged the controversy over Kennedy having a Catholic funeral, but said marginalization of people over even an issue as important as abortion is the wrong path.

“Given the profound effect of Catholic social teaching on so many of the programs and policies espoused by Sen. Kennedy and the millions who benefited from them, there is a tragic sense of lost opportunity in his lack of support for the unborn,” Cardinal O’Malley wrote.

Nevertheless, Cardinal O’Malley said, he strongly disagrees with those who said the church should not have permitted Kennedy a public Catholic funeral.

He noted that the details of the senator’s correspondence with Pope Benedict XVI in his last weeks revealed an acknowledgement of “failing to always be a faithful Catholic, and his request for prayers as he faced the end of his life.”

“The Holy Father’s expression of gratitude for the senator’s pledge of prayer for the church, his commendation of the senator and his family to the intercession of the Blessed Mother, and his imparting the apostolic blessing, spoke of His Holiness’ role as the vicar of Christ, the good shepherd who leaves none of the flock behind,” he wrote.

Cardinal O’Malley later said, “At times, even in the church, zeal can lead people to issue harsh judgments and impute the worst motives to one another. These attitudes and practices do irreparable damage to the communion of the church. If any cause is motivated by judgment, anger or vindictiveness, it will be doomed to marginalization and failure.”

Monsignor Anthony Sherman, executive director of the Secretariat of Divine Worship of the U.S. Conference of Catholic Bishops, said Kennedy’s funeral at the Basilica of Our Lady of Perpetual Help was well within the guidelines of the church’s Order of Christian Funerals.

“It was basically a regular Catholic funeral,” he said. Even the two brief remembrances by Kennedy’s sons and a eulogy by President Barack Obama were appropriate and did not overshadow the liturgical emphasis on prayer for the deceased, he said.

Besides Monsignor Sherman, a canon lawyer at The Catholic University of America in Washington was among those who said having a Catholic funeral Mass for Kennedy was perfectly appropriate under church law.

Canon 1184 provides several conditions under which Catholics must be “deprived of ecclesiastical funerals.” They include: “notorious apostates, heretics and schismatics; those who chose the cremation of their bodies for reasons contrary to Christian faith”; and “other manifest sinners who cannot be granted ecclesiastical funerals without public scandal of the faithful.”

The commentary accompanying the code text notes that “funerals may not be denied to someone who gave a sign of repentance before death,” such as summoning a priest. It notes that the conditions are rarely met to deny a “manifest sinner” a funeral that would cause public scandal.

Jesuit Father Robert J. Kaslyn, dean of Catholic University’s School of Canon Law, said in deciding whether someone is denied a Catholic funeral under Canon 1184 the church presupposes that the deceased was not a “manifest sinner.”

Canon 213 says that “the Christian faithful have the right to receive assistance” from the church, “especially the word of God and the sacraments.” Father Kaslyn said given that right, when a question of denying a funeral arises, “the value in denying a funeral would have to outweigh the value in granting one.”

He compared the pastoral issue to the question of whether couples seeking a church marriage should be denied the sacrament if it’s not clear that they are sufficiently faithful. In addressing the question, Father Kaslyn paraphrased Pope John Paul II, saying that “to judge the presence or absence of sufficient faith is almost impossible, and therefore the church should presuppose that if a couple is willing to go through the preparation process that is sufficient.”

“Trying to say whether someone is or is not a sinner is just as difficult,” he said. “In dealing with the conscience of an individual, are we to presume that an individual has not received spiritual guidance?”

In the case of Kennedy, Cardinal O’Malley presided over the funeral, with decisions about the liturgy made by the principal celebrant, Jesuit Father J. Donald Monan, chancellor of Boston College, according to a statement from the Archdiocese of Boston.

“There never was any question that Sen. Kennedy was entitled to a Catholic funeral,” the statement said. “The senator was a regular communicant at parishes in Washington, D.C., and in Massachusetts. The purpose of the funeral liturgy is to pray for the soul of the deceased person. Our prayer is inspired by our hope in God’s mercy and forgiveness. Sen. Kennedy, like any person, was imperfect and in need of God’s mercy.”

Father Kaslyn said the church doesn’t consider a funeral a reward to be withheld based upon what others believe to have been the condition of the deceased’s soul. It instead is an occasion for prayers for the deceased and comfort for the survivors, Father Kaslyn said. “We’re trusting to God’s mercy, leaving the judgment to God.”

While many families have a story of a relative who was denied a funeral in decades past because of divorce or suicide, that’s not the current practice. The commentary in the Code of Canon Law specifically says people in irregular marriages or people who committed suicide are not included among those who are automatically denied funerals, “since deprivation of a church funeral not infrequently causes as much if not more scandal than granting it.”

Cardinal O’Malley said in his blog that the way to change abortion law is to change people’s hearts. “We will not change hearts by turning away from people in their time of need and when they are experiencing grief and loss.”