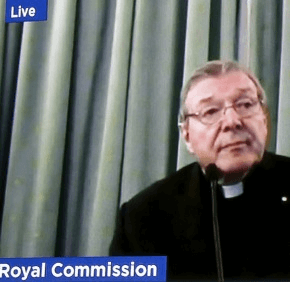 By Catholic News Service
SYDNEY – Cardinal George Pell wrapped up his evidence before Australia’s Royal Commission Into Institutional Responses to Child Sexual Abuse, answering questions, rebutting accusations and expressing regret.
In so doing, he faced questions from 11 different lawyers for various survivors and other parties to the proceedings, before finally being examined by his own lawyer.
The March 3 session in Sydney began at 9 p.m. March 2 in Rome and lasted until 3 a.m. Cardinal Pell testified via video link from a hotel; doctors said he should not make the long flight to Australia because of a medical condition.
Justice Peter McClellan, commission chair, kept lawyers on task as he tried to ensure everyone had an opportunity to question the cardinal, who now serves as prefect of the Vatican’s Secretariat for the Economy.
Lawyers grilled Cardinal Pell on a range of matters such as alleged conversations occurring 30 or 40 years ago, including when he was a priest in the Diocese of Ballarat. Cardinal Pell responded to each question and accusation put to him, outlining reasons that a number of the claims were implausible.
In a previous hearing, a witness with the pseudonym BWF had told the commission that one day after school, he rode his bicycle to the Ballarat cathedral rectory to see then-Father George Pell and tell him about the physical and sexual abuse being suffered by his brother at the hands of Christian Brother Edward Dowlan. BWF alleged that Cardinal Pell had reacted angrily and told him to return to school.
In his testimony, Cardinal Pell showed that he had never lived at the cathedral rectory and had a full-time academic position at a college away from the cathedral, which kept him in the office until evening.
“This is false evidence,” the cardinal said. “Even the language that I was alleged to have used is ridiculous. The suggestion that I would speak like that to a young person in distress is absolutely false.”
Another witness with the pseudonym BWE had given evidence that, while serving as an altar boy for a funeral concelebrated by Cardinal Pell at the cathedral in September 1983, he had overheard him tell Father Frank Madden that Father Gerald Ridsdale had been “rooting” boys again. (“Rooting” is an Australian vulgar expression for sexual intercourse).
However, Father Madden had already told the commission in previous evidence that, at the time, he was based in a parish more than 100 miles away and had a practice of not returning to his previous parish for funerals because it was the duty and privilege of the current pastor to minister to the flock in that area.
Cardinal Pell’s lawyer also presented the cardinal’s diary entries for each of the days on which the cathedral records had indicated a funeral had been held, showing that the cardinal had other activities scheduled for those days.
Cardinal Pell began his testimony Feb. 29. Earlier, lawyers for the commission called it “implausible” when the cardinal insisted that Melbourne archdiocesan education office staff had not briefed him on serious sexual and other misconduct. But Cardinal Pell’s lawyer reminded the commission of evidence given by the former director of education in the Archdiocese of Melbourne that he did not at any time approach Cardinal Pell or any auxiliary bishop about the matter, dealing only with then-Archbishop Frank Little and the vicar general.
The final day of testimony also gave Cardinal Pell an opportunity to express some of his regret about the way matters were handled.
In particular, he told the commission that he should have done more with a 1974 allegation by a student that Brother Dowlan had been “misbehaving with boys.” At the time, Cardinal Pell reported the matter to the school chaplain, who told him the Christian Brothers were aware and dealing with it. He conceded that his response was inadequate.
In a poignant exchange, a lawyer for a victim abused in the confessional as a young girl told Cardinal Pell that her client had not entered a confessional since. Cardinal Pell said it was a great lament that the abuse had seen so many victims, their friends and families, and even the wider community lose their faith as a result of such experiences.
Speaking to media at the conclusion of the commission hearings, Cardinal Pell said the hardest part of giving testimony had been revisiting the harrowing details of the abuse suffered by so many.
Cardinal Pell then met with survivors of sexual abuse who traveled to Rome to watch him give evidence. He said he was working with them to try to arrange a meeting with Pope Francis before they left Rome.
Also see:
Interfaith and ecumenical delegation from Baltimore meets Pope Francis
Copyright ©2016 Catholic News Service/U.S. Conference of Catholic Bishops.
PrevNext