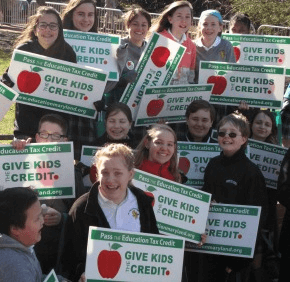 Despite a cold morning wind, hundreds of children from across Maryland raised their voices in Annapolis March 2, calling on legislators to expand school choice in the state.

“We just want to figure out how to better our education and help our future,” said Sydney Paschall, eighth-grader and student body president at Cardinal Shehan School in Baltimore.

Passing the Maryland Education Credit is the best way to do so, said the religious and political leaders who spoke at the rally, which opened Nonpublic School Advocacy Day, organized by the Maryland chapter of the Council for American Private Education (CAPE).

“We’re big supporters of giving parents real choices in the schools they send their kids to,” said Lt. Gov. Boyd K. Rutherford, speaking on Lawyers Mall in support of the credit.

According to Maryland CAPE, nonpublic schools save taxpayers approximately $1.5 billion every year by educating more than 100,000 students.

Rutherford said that he knew from personal experience the importance of school choice. As his eldest son was getting ready for sixth grade, the California public junior high school he would have attended was “terrible, problematic,” the lieutenant governor said.

He recalled speaking to administrators: “They talked about how they wanted all the schools to be as good as the magnet school I wanted to send my son to.”

“I told them, quite succinctly, that I didn’t have time for that,” Rutherford said, adding that the school had needed improvement for 20 or 30 years. “I said that my wife and I have choices. We can send our son to a private school or move. … But some of my neighbors did not have choices.”

State Senate President Thomas V. “Mike” Miller, a Democrat, noted that the education credit has support across party and other lines.

“There’s Republicans; there’s Democrats; there’s Christians; and there’s Jews,” he said. “This is everybody coming together to make a wrong a right.”

For the students, the day offered an opportunity to learn about the legislative process while engaging with it. Following the rally, they sat in on General Assembly proceedings and encouraged their representatives to support the education credit.

“Some people who want to be politicians can get some inspiration for the future today,” said Elijah Taylor, a seventh-grader and class representative at Cardinal Shehan, which brought members of its student government to the rally.

Taylor was skeptical of politics’ role in his own future.

Dr. Barbara McGraw Edmondson, executive director/superintendent of Catholic schools for the Archdiocese of Baltimore, told the Catholic Review that Advocacy Day “creates a reality for our legislators of who we’re advocating for (the students).”

“We want to truly engage our legislators to allow our business people to help in the process of education of young people in Maryland,” she said.

James B. Sellinger, chancellor for education for the archdiocese, emphasized to the Review that the education credit would also help public school students.

The lead sponsor of the education credit in the House of Delegates, Del. Antonio Hayes, a Democrat representing Baltimore City, said that passing the credit was a matter of justice.

“The greatest justice we can provide the young people of Maryland is an opportunity for a quality education,” he said.

The Maryland Education Credit will be heard before the House Ways and Means Committee March 7.