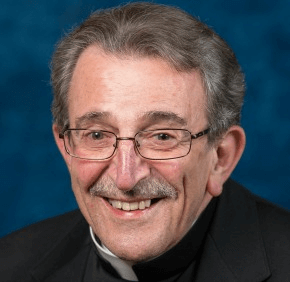 By Catholic Review Staff
A funeral Mass for Marianist Father George F. Onida was offered Feb. 26 at St. Bridget Church on Long Island, N.Y. Father Onida died Feb. 14. He was 76.
Father Onida served at parishes in Puerto Rico, Peru and the eastern U.S., including at St. Joseph in Sykesville, where he served as associate pastor from 2010 to 2013.
Born in New York City in 1939, Father Onida entered the Marianist postulate shortly before his 15th birthday, but discontinued his Marianist formation a few years later. He remained connected to the Society of Mary, however, teaching at Marianist schools.
After earning master’s degrees in Spanish and, from Loyola University Maryland, in education, he spent a few more years teaching.
Just before his 40th birthday, Father Onida entered the Marianist novitiate in Baltimore, professing his first vows in 1981.
According to Doris Piazza, a parishioner of St. Joseph, the priest’s ministry was shaped by his service in Puerto Rico and Peru, which followed his ordination.
“He fell in love with the culture,” she said, adding that he felt great love for Hispanics everywhere. “He really felt that Hispanics in the United States are now the pillar of the church.”
While with the Marianist community in Eldersburg, Father Onida lived with Brother Michael Chiuri.
“Father George’s Italian roots and his adoption of Hispanic culture made relationships and caring for others very important to him,” said Brother Michael. “I learned a great deal about treasuring relationships from him.”
Father Onida moved to the Marianist Community in Cupertino, Calif., in 2013.