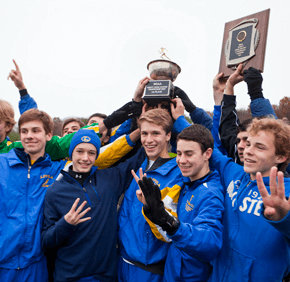 Tyler Spear, a junior, remained unbeaten against conference competition this season, as he covered the 3.1-mile course in 15 minutes, 58.4 seconds. Teammates Kevin Wegner and Ted Terpos finished fourth and fifth, respectively, in a race that had nearly 150 finishers.

To navigate the slideshow below, click on the arrows.

In 2013, Spear can become Loyola Blakefield’s second repeat champion in recent years, as University of Oregon sophomore Matt Jablonski won the MIAAs for the Dons in both 2009 and ’10.