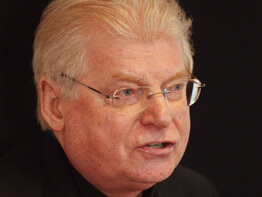 WASHINGTON (CNS) — An Italian cardinal and a Muslim scholar from India tried to answer a question that has plagued humanity throughout history: “Why are we here?”

Cardinal Angelo Scola, the patriarch of Venice known for his lengthy texts and theological passion, shared Christian thinking on creation, humanity, freedom and finite existence. Muzammil Siddiqi, former president of the Islamic Society of North America and current director of the Islamic Society of Orange County, in California, gave Islam’s take on the relationship between God and humanity.

The Jan. 16 discussion between the two religious scholars was the climax of a daylong dialogue of Catholic and Muslim theologians from around the United States on “The Primordial Relationship Between God and the Human Person in Catholicism and Islam.” The dialogue was sponsored by the Intercultural Forum for Studies in Faith and Culture at the Pope John Paul II Cultural Center in Washington.

“The question of meaning … resurfaces inexorably, like those little clumps of grass that push through the spring, even in the most desolate wastes,” said Cardinal Scola.

“Why does God create humankind … when he has no need to?” he asked, adding, why are creation and its finitude not a misfortune?

Jesus is the answer, he said.

God the creator revealed himself fully in Jesus, who is “not only the redeemer but also the head of creation,” said the cardinal, who noted a difference between Christianity and Islam: In Christianity, humanity’s creation depends on a Trinitarian God.

“If the Father gives himself wholly to the Son in the Spirit, the act of creation will then have to be understood as included in this Trinitarian communication: The Son being the image of the Father, he is consequently also the image that pours out via him through the Spirit and hence also of all the creatable,” said Cardinal Scola.

In creation, people are willed to live as the Son of God, he said.

Although humans are filled with the Holy Spirit, they are limited in power, Cardinal Scola said. Humans try, but are unable to fully grasp these concepts of limitless divinity and love, he said.

Humans need Jesus, who died for them and at the point of humanity’s mortality “conquers death and opens” eternity for them.

“The very fact that our wills are limitless while our power is limited tells us that the ultimate nucleus of our subjectivity remains unreachable for us,” he said.

Cardinal Scola pointed out that in Christianity and Islam there is an “ineradicable distance between God and the creature,” but God reveals himself in history.

Siddiqi began his portion of the talk emphasizing that Christians, Muslims and Jews believe in the same God.

God creates humans, his most honored creation, and God is also “our final return,” he said. Humans are created with God’s best characteristics and in their best possible form, he said.

“The law of God is inscribed” in the hearts of humans and “not imposed from the outside,” Siddiqi said.
Humans, then, are awakened and guided through God’s revelation in the prophets, he said.

Siddiqi said humans cannot fully grasp the nature of the spirit of God breathed into them upon creation.

“Mankind, because of our human weakness and abuse of freedom, is troubled and needs guidance” from the prophets, education and parents, he said.

Both religious leaders expressed their passion for finding similarities and respecting the differences of Christianity and Islam for the sake of peace and harmony for the global community.

Dialogue is “not only an exchange about the abstract,” it is also about witnessing the dialogue by living with faith as a source of hope for all humanity, said Cardinal Scola.

Siddiqi said that dialogue is a “supremely ethical enterprise” of learning facts and clearing misconceptions so the world can live in peace.