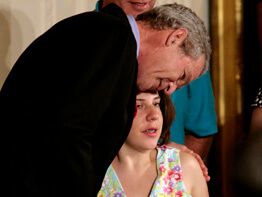 WASHINGTON – President George W. Bush June 20 vetoed a bill to expand federal funding for medical research on human embryonic stem cells, saying it “would compel American taxpayers, for the first time in our history, to support the deliberate destruction of human embryos.”

Cardinal Justin Rigali of Philadelphia, chairman of the U.S. bishops’ Committee on Pro-Life Activities, praised the veto. “This bill would not actually enhance stem-cell research, but divert federal funds from legitimate research toward avenues requiring the destruction of innocent human life,” he said. “The cause of science is not enhanced but diminished when it loses its moral compass.”

In conjunction with the veto, Bush issued an executive order calling on federal agencies to strengthen the nation’s commitment to research on pluripotent stem cells.

Nancy Fortier Paltell, associate director for the respect for life department of the Maryland Catholic Conference, called the president’s veto “wonderful” and said the “whole country should applaud him for drawing a line in the sand.”

“Now this is going to force the federal government to fund the research that’s most likely to help patients,” she said, noting that adult stem cells research using cells obtained from umbilical-cord blood, amniotic fluid and other sources has been successful in treating several diseases.

“There are so many ethical ways to get the cells they want,” she said.

He said a recent research breakthrough has shown that ordinary adult cells can be reprogrammed to become pluripotent stem cells, showing that “science not only raises new ethical questions but at times can help address them.”

“Stem cells harvested from adults or umbilical cords pose no moral problems and have great value for medical research,” he said, but the “killing of human embryos is never justified, even for the advancement of scientific research.”

The vetoed bill was titled the Stem-Cell Research Enhancement Act of 2007. It passed in the Senate April 11 by a 63-34 vote and in the House June 7 by a vote of 247-176. Neither vote reflected the two-thirds majority that would be needed to override a veto.

The day before the House voted to relax the funding restrictions on human embryonic research, Cardinal Rigali had urged it to defeat the bill.

In a letter to all House members, he said, “Embryonic stem-cell research has been as disappointing in its results as it has been divisive to our society. Pursuit of this destructive research will almost certainly require you to embrace more and more egregious violations of moral norms in the effort to bring its ‘promise’ to fruition.”

“Ethically sound research using nonembryonic stem cells has continued to advance, helping patients with over 70 conditions in clinical trials,” he added. “Since Congress debated this issue last summer, further evidence has emerged on the versatility of adult stem cells and on the ability of adult cells to be reprogrammed to rival the flexibility of embryonic cells.”

Democratic leadership had made the bill a top priority when the Democrats gained control of Congress this year. It would have ended the Bush administration’s six-year-old policy limiting federal funding of human embryonic stem-cell research to projects that relied only on colonies of embryonic stem cells created before Aug. 9, 2001, the date that policy was announced.

Democratic National Committee Chairman Howard Dean sharply criticized the veto, saying, “Bush once again put political posturing ahead of sound science, turning his back on the overwhelming majority of Americans who support stem-cell research and the 100 million Americans suffering from debilitating diseases who could benefit from this life-saving science.”

Sen. Hillary Rodham Clinton of New York, a contender for the Democratic presidential nomination next year, accused Bush of putting “ideology before science, politics before the needs of our families.”

White House press spokesman Tony Snow responded, “This actually is putting science before ideology. There are many people who believe that you have to force taxpayers into making a choice of destroying human life – destroying an embryo in order to proceed with embryonic stem-cell research. That would be an ideological position.”

“The president does not believe it’s appropriate to put an end to human life for research purposes,” he said. “That’s a line he will not cross.”

In his veto message to the Senate, Bush said since 2001 his administration “has made more than $130 million available for research on stem-cell lines derived from embryos that had already been destroyed. We have also provided more than $3 billion for research on all forms of stem cells, including those from adult and other nonembryonic sources.”

The president’s new executive order directs the Department of Health and Human Services and the National Institutes of Health to ensure that any human pluripotent stem-cell lines produced in ways that do not create, destroy or harm human embryos will be eligible for federal funding.

It encourages scientists to work with the NIH to add ethically produced stem-cell lines to the registry.