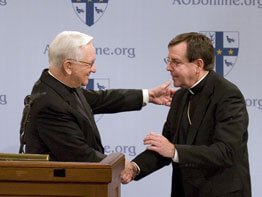 In addition, Father Cirilo B. Flores, pastor of St. Norbert Parish in Orange, Calif., was appointed an auxiliary bishop of the Diocese of Orange. No successor to Bishop McRaith was immediately named.

The resignations and appointments were announced in Washington by Archbishop Pietro Sambi, apostolic nuncio to the United States.

The appointment of Archbishop Vigneron, 60, allows a native son of the Detroit Archdiocese to return home. His return to southeast Michigan comes at a time of severe economic recession in the heavily industrialized region.

Cardinal Maida addressed concerns about the economy twice in recent months, urging Catholics to support each other, especially those in need, and to seek solace in God during the current crisis. He also was quick to praise the $17.4 billion loan package to American automobile manufacturers passed by Congress in December.

During a Jan. 5 press conference in Detroit Archbishop Vigneron recognized the pastoral and social challenges both the church and the wider community are facing as the economy struggles to regain its footing.

“To that challenge, as I begin my service as archbishop, I want to bring all the riches of grace which the Holy Spirit has bestowed on the church,” he said.

In an interview with The Michigan Catholic, the archdiocesan newspaper, Archbishop Vigneron said he was surprised by his appointment because no native of the archdiocese had ever been appointed to lead the Detroit church. Most of all, he said he looked forward to “being able to, day by day, be of service to people who I know very, very well. And returning to being involved in the lives of people who mean a lot to me.”

The new archbishop will be installed Jan. 28 at Blessed Sacrament Cathedral.

Archbishop Vigneron has led the Diocese of Oakland since 2003. A native of Mount Clemens, Mich., he originally was named an auxiliary bishop of Detroit in 1996. He was ordained in 1975 and was rector and president of the archdiocese’s Sacred Heart Major Seminary until his appointment to Oakland six years ago.

Cardinal Maida, 78, has been archbishop of Detroit and its 1.4 million Catholics since 1990. He was elevated to cardinal in 1994. He submitted his resignation to Pope John Paul II in March 2005, according to the archdiocese. But Pope Benedict invited him to continue in his position until his resignation was accepted.

Bishop McRaith, 74, has served the Owensboro Diocese since 1982. He was born in Hutchinson, Minn., and was ordained a priest in the Diocese of New Ulm, Minn., in 1960. He was chancellor and vicar general of the diocese prior to his appointment as bishop.

As a priest, Bishop McRaith was president of the National Catholic Rural Life Conference from 1971 to 1978. After becoming a bishop he authored the U.S. Conference of Catholic Bishops’ 1992 pastoral letter, “Stewardship: A Disciples’ Response.”

Bishop-designate Flores, 60, was ordained in 1991. The Corona, Calif., native said his appointment came as a shock, especially because he had just been installed as pastor of St. Norbert Parish in Orange in December.

“With the help of God and the intercession of his Blessed Mother, I will try to do my best to take on these new responsibilities,” he said during a Jan. 5 press conference at diocesan offices where he was introduced by Bishop Tod D. Brown of Orange.

Bishop-designate Flores will be ordained by Bishop Brown March 19 at St. Columban Parish in Garden Grove, Calif. He is the second priest from the diocese to be appointed a bishop. He will assume the responsibilities of Bishop Jaime Soto, who was appointed coadjutor bishop of Sacramento, Calif., in October 2007.

A graduate of Stanford Law School in California, the bishop-designate worked as a lawyer in private practice for 10 years before entering St. John’s Seminary in Camarillo, Calif., in 1986 to study for the priesthood.

The Orange Diocese was created in 1976 and has more than 1.2 million Catholics.