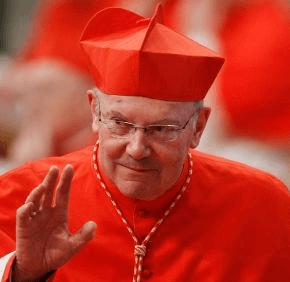 KAILUA-KONA, Hawaii – Cardinal William J. Levada was arrested in Kailua-Kona, on the island of Hawaii, for driving under the influence of alcohol.

The arrest was made at about midnight Aug. 19. Cardinal Levada, 79, was released after posting $500 bond. He is due to appear in court Sept. 24.

Cardinal Levada, the former archbishop of San Francisco and of Portland, Oregon, and the retired prefect for the Vatican Congregation for the Doctrine of the Faith, said in a statement issued Aug. 24 by the Archdiocese of San Francisco, “I regret my error in judgment. I intend to continue fully cooperating with the authorities.”

The news was first reported by the Hawaii Tribune Herald daily newspaper, which said he was vacationing with priest friends in Hawaii at the time of the incident.

“‘Punishment’ is not a factor” in Cardinal Levada’s case, San Francisco archdiocesan spokesman Michael Brown said in an email to the Huffington Post.

“Speaking generally at all levels of the organization, such things would be looked at on a case-by-case basis,” Brown added. “Where a lapse in judgment occurred, the matter would probably be considered less serious. If the matter seemed to indicate a more serious problem, this would be treated more seriously. This would be true at all employee levels.”