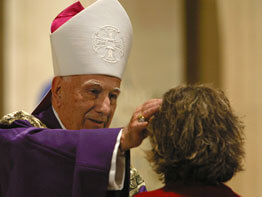 VATICAN CITY – Italian Cardinal Pio Laghi, a former Vatican nuncio to the United States who tried to convince President George W. Bush not to invade Iraq in 2003, died Jan. 10 at the age of 86.

Cardinal Laghi had been suffering from a blood disorder, but told a conference just before Christmas that he thought the worst had passed. On that occasion, speaking by webcam from his Vatican apartment, he again expressed his deep disappointment that President Bush did not heed Pope John Paul II’s warnings about the possible consequences of the war in Iraq.

Pope John Paul had sent Cardinal Laghi to Washington as his personal envoy to meet with President Bush and to try to persuade him to avoid military action in Iraq. The cardinal later said he felt Bush and his aides had already made up their minds to invade the country and did not seem willing to listen to more input.

The president acted almost as if he were divinely inspired and “seemed to truly believe in a war of good against evil,” Cardinal Laghi said.

At the Dec. 22 conference on the future of U.S.-Vatican relations, Cardinal Laghi said the Vatican was concerned about President-elect Barack Obama’s positions on the family and on the unborn, but looked forward with hope to his presidency fostering more attention to the poor and easing violence around the globe.

He noted the “huge exodus” of Christians from Iraq and the “real persecution” of those who have remained in the country, and said it would not have occurred if the war had been avoided.

In a telegram Jan. 12 offering his condolences to the cardinal’s nieces and nephews, Pope Benedict XVI praised the cardinal for “long and generous service to the Holy See, particularly as papal representative in various countries and as prefect of the Congregation for Catholic Education.”

In a statement released by the White House Jan. 11, President Bush offered his condolences to Pope Benedict and to all Catholics.

“Cardinal Laghi was a friend who, in his more than 60 years of service to the Catholic Church, worked tirelessly for peace and justice in our world,” Bush said. “Cardinal Laghi always strove to unite people of all religions and promote reconciliation, religious freedom and tolerance.”

Cardinal Angelo Sodano, dean of the College of Cardinals, was scheduled to preside over the cardinal’s funeral Mass Jan. 13 in St. Peter’s Basilica. Pope Benedict was to be present at the end of the Mass to deliver remarks and preside over the final commendation.

Cardinal Laghi’s death leaves the College of Cardinals with 190 members, 116 of whom are under age 80 and therefore eligible to vote in a papal conclave.

In 1990, Pope John Paul named him head of the Congregation for Catholic Education, a position he held until his retirement in 1999.

But even in retirement he continued serving as Pope John Paul’s personal envoy to troubled parts of the globe.

After renewed tensions between Israelis and Palestinians erupted in late 2000, Pope John Paul sent the cardinal to the Holy Land to try to convince Israeli Prime Minister Ariel Sharon and Palestinian leader Yasser Arafat to halt the violence and return to negotiations.

The Italian cardinal was known as an urbane diplomat with a ready wit who was fluent in English, Spanish and French, in addition to his native Italian. He was an avid player of racquetball, squash and tennis, which he reportedly used to play with President George H.W. Bush.

He entered the Vatican diplomatic service in 1952, six years after he was ordained a priest, and was named apostolic delegate in the United States in December 1980.

During his years in Washington he was also the Holy See’s permanent observer to the Organization of American States.

He played a mediating role in a number of difficult issues in the U.S. church, including widely publicized tensions between U.S. bishops and the Vatican in the mid-1980s, the Vatican’s 1986 attempt to strip Seattle Archbishop Raymond E. Hunthausen of some areas of pastoral authority, and a two-year controversy surrounding a group of nuns who signed an ad on abortion in The New York Times and were ordered by the Vatican to recant.

Pio Laghi was born May 21, 1922, in Castiglione, a small town in north-central Italy. When he entered the Vatican diplomatic corps in 1952, his first assignment was for two years at the Vatican Embassy in Nicaragua.

After assignments as an assistant to Vatican diplomats in the United States and in India, in 1964 he returned to Rome to work at the Vatican Secretariat of State.

In 1969 he was made an archbishop and was appointed apostolic delegate in Jerusalem and Palestine. In 1971 he was given the additional post of papal pro-nuncio to Cyprus, and in 1972 the job of apostolic visitor to Greece was added to his duties. In 1974, he moved to South America as nuncio to Argentina, a position he held until 1980.

Pope John Paul named him to the College of Cardinals in 1991.