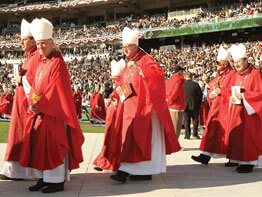 Cardinal William H. Keeler and Baltimore’s active and retired auxiliary bishops, said they were deeply moved by Pope Benedict XVI’s April 15-20 visit to the United States – especially by the warm way the Holy Father was received.

Cardinal Keeler, who participated in almost all of the papal events of the visit, said one of the “big highlights” was the way young people responded to Pope Benedict during an April 19 youth event at St. Joseph Seminary in Yonkers, N.Y. The boisterous crowd interrupted the pope numerous times with applause and chants, he said.

Cardinal Keeler said he was pleased that the pope acknowledged the 200th anniversary of the raising of the Baltimore diocese to archdiocesan status. The cardinal greeted the pope personally and thanked him for coming to the United States, he said.

Cardinal Keeler said the pope was “very warmly” received at ecumenical and interfaith events in Washington and New York. At the Pope John Paul II Cultural Center in Washington, the pope greeted Jewish, Muslim and other faith leaders before praying in the chapel. He later gave a special message to the Jewish people for Passover, Cardinal Keeler said.

“There was a great outpouring of affection for him from Jewish, Christian, Muslim and other leaders,” said Cardinal Keeler.

For Bishop W. Francis Malooly, western vicar, it was the first time he has seen the pope in person since the pope was elected three years ago. Like Cardinal Keeler, the bishop said he was struck by the way the people expressed their love for the pope.

“He seemed very happy and there was a lot of applause for him,” said Bishop Malooly. “He has a wonderful presence.”

There were several times when people sang “Happy Birthday” to the pope on his 81st birthday, and Bishop Malooly was among those joining in the chorus.

“He smiled, and you could tell he was grateful,” said Bishop Malooly.

Bishop Malooly said the pope delivered an affirming message and reminded Catholics of the need for evangelization.

“He’s so thoughtful and expresses himself so well,” said Bishop Malooly, noting that the pope left rosaries and holy cards for each of the American bishops. “It will be important for all Catholics to read all his presentations.”

“The liturgy was so beautifully planned and brought together so many elements that are special to Catholicism within the United States,” he said.

Bishop Rozanski said he was seated on the left side of the altar and had a very good view of the pope at his chair.

“I felt a true sense of pride in my faith and my Catholicism, and a strong sense of unity,” he said.

Asked what was most special about the Mass, Bishop Rozanski recalled how the pope stopped to bless a soldier dressed in his fatigues and sitting in a wheelchair.

“It was a beautiful, yet simple gesture and really captures who Pope Benedict is,” he said.

New York City normally buzzes with skyscraper-tall energy, but add the presence of a pope, and there was “a great deal of excitement … you could feel the presence of the Holy Father,” said Bishop Denis J. Madden, urban vicar.

“Everyone was very, very friendly … asking about the Holy Father’s visit,” he said.

Often he and Archbishop O’Brien were stopped by people asking for a blessing, or who wanted to chat about an issue they were facing, especially at the youth rally, he said, where 25,000 seminarians and young people had been expected yet the final headcount climbed to more than 34,000.

Since fewer bishops attended the Yankee Stadium Mass than in D.C., the bishop was closer to the core, this time able to go onto the platform.

“It was exciting to be with the Holy Father and the church of America in miniature,” said Bishop Newman.

Bishop Newman met the pontiff when he was Cardinal Joseph Ratzinger.

“I think he’s starting to come through as he really is,” said Bishop Newman.

He said he finds the pope to be very “open,” and a good successor to Pope John Paul II.

“What he says, he faces reality, he is encouraging and challenging, and he really does give hope,” Bishop Newman said. “It makes you recognize you’re one with him during the ministry of the Lord.”

“It was exciting to be there with the music and his homily, and the liturgy itself I thought was just inspiring,” Bishop Newman said.