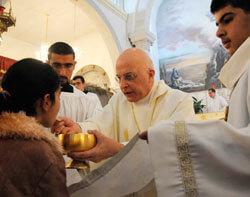 RAMALLAH, West Bank – Palestinian Christians must feel the support of the universal church and must not feel isolated in their difficulties, said Chicago Cardinal Francis E. George, president of the U.S. Conference of Catholic Bishops.

“Their cares are also our cares, and it is important to say that. I hope our visit encouraged them,” Cardinal George said after greeting parishioners of Ramallah’s Holy Family Parish, where he celebrated Mass on the feast of Jesus’ baptism Jan. 13.

The cardinal was in the Holy Land Jan. 11-15 to participate in the ninth annual meeting of the Coordination of Episcopal Conferences in Support of the Church in the Holy Land, a Catholic group. He was part of a 28-member delegation that included nine bishops.

Clergy who participated in the meeting celebrated Masses at several of the Catholic parishes in the Palestinian territories.

Cardinal George said it was wonderful to see the life of faith led by the local Christians and feel with them the “fundamental unity as disciples of Christ,” despite the difference in language and culture.

“Some of us have come to you … from the USA, Britain, Germany, Spain, France, but first of all we come as followers of Jesus,” Cardinal George told parishioners. “Because all of us are disciples of Jesus, we want to be with you on this feast day, on a joyful day, but also every day in the difficulties and problems you have here in the Holy Land.”

He said that “when we are not with you physically we are with you in Christ, and we promise you are in our prayers, and we ask in return your prayers for us.”

Archbishop Franco briefed the church leaders on the status of the Fundamental Agreement, which set a framework for negotiations on church-state questions between Israel and the Vatican.

Cardinal George said Patriarch Sabbah expressed concern about the situation of Christians in the Gaza Strip, although for the moment, Hamas, an Islamic extremist political and military movement, appears to be protecting the Christians. Hamas seized control of the Gaza Strip last June.

The cardinal expressed hope that the internal dispute between Hamas and the Palestinian political movement Fatah would be resolved peacefully with a Hamas recognition of Israel, a rejection of violence and an acceptance of previous agreements.

Cardinal George said that in meetings with Israeli and Palestinian political leaders church officials expressed their concern for peace and encouraged both to move forward in normalizing relations with the Vatican. He said they also discussed checkpoints, visas and the expansion of settlements, as well as issues regarding security, militias and political reforms.

“We are firm supporters of the state of Israel and … a two-state solution providing for a safe Israel and a viable Palestinian state,” said Cardinal George.

He said it was important to “listen and see the various perspectives to this very complicated situation” in the meetings with the local leaders and residents.

“We are not the ones with the solutions. We come with the hope there will be peace in the Holy Land,” said the cardinal. “Our … concern is peace for everyone; how to achieve that is a local concern.”

Cardinal George said the visit allowed him to see the situation more clearly, including the issues of the checkpoints and the Israeli separation barrier, which, when completed, will be a 400-mile-long blockade of concrete slabs and barbed-wire fences separating Israel from the West Bank.

“No one loves the wall. Even Israel is saying it wants (the wall) to be temporary. It is a … complicating factor in people’s lives, and it dominates what they can hope for in life,” the cardinal said.