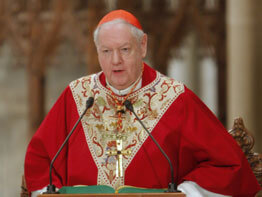 WASHINGTON – Cardinal Edward M. Egan, who will step down as New York archbishop with the installation of Archbishop Timothy M. Dolan, made Catholic schools and vocations a focus of his nine-year tenure in New York.

Through the Cardinal’s Scholarship Program he raised millions to help low-income children attend 93 inner-city Catholic schools in Manhattan, the Bronx and Staten Island. Changing demographics and an archdiocesan realignment process, however, also led to the closing of more than a dozen Catholic schools.

He began ordaining priests even before his formal installation as New York archbishop, with the May 20, 2000, ordinations of five men in St. Patrick’s Cathedral.

Cardinal Egan leaves his successor a church that is growing in the number of Catholics, but at the same time has fewer active priests today and has had to close some parishes.

A Catholic population of 2.5 million people – up from 2.4 million when then-Archbishop Egan was named to head the archdiocese in 2000 – makes New York the second-largest U.S. archdiocese, after Los Angeles.

Cardinal Egan, who turns 77 April 2, is a Chicago-area native and a canon lawyer who knows Rome and the Vatican well. He studied there and served 14 years as a judge in the Roman Rota, the church’s central appellate court, before returning to the United States as a bishop in 1985.

He was a New York auxiliary bishop for three years and archdiocesan vicar of education there before he was named to head the Diocese of Bridgeport, Conn., in 1988.

Catholic schools also were a priority for him in Bridgeport, where he oversaw a program to regionalize the diocese’s elementary schools and helped raise millions of dollars for education programs and to support religious and homes for retired clergy.

He also was part of the creation by the state’s bishops of the Connecticut Federation of Catholic Schools in 1990 to lobby for legislative support and encourage enrollment.

More than a year after his installation in New York, the Sept. 11, 2001, terrorist attacks brought down the World Trade Center twin towers and killed close to 3,000 people. Cardinal Egan visited ground zero, where the towers had stood, presided at memorial Masses and spoke at an interfaith service two days later.

In May 2005 the cardinal dedicated a Catholic memorial at ground zero to promote prayer there and to serve as a complement to the national memorial planned for the site.

After the papal visit he publicly criticized former New York Mayor Rudy Giuliani for having received Communion at St. Patrick’s Cathedral. The cardinal said that violated an agreement he had reached with Giuliani in 2000 that he would not take Communion “because of his well-known support of abortion.”

Edward Michael Egan was born in Oak Park, Ill., April 2, 1932. He was ordained a priest of the Chicago Archdiocese in December 1957 after studies at Quigley Preparatory Seminary in Chicago, St. Mary of the Lake Seminary in Mundelein, Ill., and the Pontifical Gregorian University in Rome.

After an early assignment at Holy Name Cathedral Parish, he served as assistant chancellor and secretary to Cardinal Albert Meyer of Chicago until 1960. Then he was named assistant vice rector of the Pontifical North American College in Rome. While there, he earned a doctorate in canon law from Gregorian University.

He returned to Chicago in 1964. He was assistant chancellor from 1964 to 1968 and co-chancellor for human relations and ecumenism from 1968 to 1972. He also was secretary to Cardinal John Cody.

In 1971 he returned to Rome as a judge in the Roman Rota, which hears appeals from lower church court decisions around the world, chiefly in marriage annulment cases.

While assigned to the Rota, he also taught juridical practice at its postgraduate school for canon law.

He was one of the six canonists who reviewed the final draft of the revised Code of Canon Law with Pope John Paul II before the pope formally issued the document in 1983 as the new general law of the church.

In 1978, while on the Rota, then-Monsignor Egan was one of the small number of noncardinals allowed inside the conclave that elected Cardinal Karol Wojtyla as Pope John Paul II. He was responsible for checking material sent into and out of the conclave area.

Years later, he was named a cardinal by Pope John Paul, who formally installed him in the College of Cardinals Feb. 21, 2001.