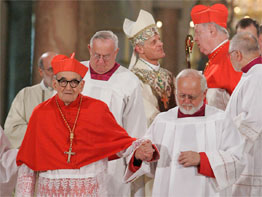 Cardinal Dulles, a Jesuit theologian, ended his 20-year series of annual McGinley lectures, from 1988 to 2008, with a short summation of his theology and his ministry and a synopsis of his previous lectures.

The 89-year-old cardinal has addressed theological issues and spoken on secular issues such as politics, human rights and the death penalty.

Confined to a wheelchair and incapable of prolonged speech as a result of post-polio syndrome which he originally contacted when he was in the Navy 62-years ago, Jesuit Father Joseph P O’Hare, Fordham’s former president, gave the presentation for the cardinal.

Father Robert P. Imbelli, a New York archdiocesan priest, who is associate theology professor at Jesuit-run Boston College, presented an analysis of the cardinal’s speech. The priest referred to himself as a “Jesuit ‘in pectore,’“ or “in his heart,” which refers to the pope’s privilege of naming cardinals whose names he keeps a secret.

In his lectures, which have always been well attended, the cardinal has defended Catholic orthodoxy and explored oft-debated topics.

He said his principal aim in his lectures was “to present and classify the existing opinions” and “to criticize views that are inadequate.”

He always tried “to incorporate the valid insights of all parties to the discussion, rather than perpetuate a one-sided view that is partial and incomplete,” he said.

“I think of myself as a moderate trying to make peace between (opposing) schools of thought. While doing so, however, I insist on logical consistency. Unlike certain relativists of our time, I abhor mixtures of contradiction,” Cardinal Dulles said.

He began his theological lectures “by asking what others, especially authoritative voices, had to say about pertinent questions,” he said. If everyone agreed, “it is sufficient to note the consensus,” he added.
If a spectrum of opinions existed, “I sought out the best arguments in favor of each major position,” he continued. He said his intention was “to give an informed judgment as to which positions are sound and which should be rejected.”

In each case, “I am willingly adhering to the testimony of Scripture and perennial Catholic tradition,” he said.

The cardinal admitted he never strove for originality.

“Very few new ideas, I suspect, are true. If I conceived a theological idea that had never occurred to anyone in the past, I would have every reason to think myself mistaken,” he said.

In the presentation Cardinal Dulles reconfirmed his faith, his orthodoxy, his spirituality and his commitment to the Society of Jesus. He also offered a final word against the materialism, relativism, subjectivism, hedonism, scientism and superficial anti-intellectualism he said is found in modern society.

“Western thought,” he said, “followed in the path of cognitive realism for many centuries before the revival of agnosticism in the Renaissance.” The cardinal repeated Pope John Paul II’s admonition that philosophy should seek to “resume its original quest for eternal truth and wisdom.”

“Science, we all know, does not rest on a treasury of revealed knowledge handed down in authoritative tradition,” the cardinal said. “Science has wonderfully increased our powers to make and to destroy, but it does not tell us what we ought to do and why.

“It does not tell us where the universe came from, or why we exist, or what our final destination is. And yet some scientists speak as though their discipline were the only kind of valid knowledge,” he said.

Even as an undergraduate student 70 years ago, he felt the “oppressive nature of a culture that had no place for objective moral norms and meaning.” It was this desperation for enlightenment, the cardinal admitted, that set him “on the path that led through ancient Greek philosophy to Catholic faith.”

“Christian revelation brought a tremendous increase of light. God alone, I learned from the New Testament, was good and true in an unqualified sense,” he said. “And the same God in all his beauty and majesty became one of our human family in Jesus Christ, the truth, the way, and the life.”

“The most important thing about my career, and many of yours, I feel sure, is the discovery of the pearl of great price, the treasure hidden in the field – the Lord Jesus himself,” he said.

In summation, the cardinal, also in the voice of Father O’Hare, poignantly referred to his present weakened state not as a negative or a detriment, but instead, a sign of the triumph of love.

“Suffering and diminishment are not the greatest of evils, but are normal ingredients in life, especially in old age. They are to be accepted as elements of a full human existence,” he said.

“As I become increasingly paralyzed and unable to speak, I can identify with the many paralytics and mute persons in the Gospels, grateful for the loving and skillful care I receive and for the hope of everlasting life in Christ,” he said.

“If the Lord now calls me to a period of weakness, I know well that his power can be made perfect in infirmity,” he added. “Blessed be the name of the Lord!”

The grandson of a Presbyterian minister, Cardinal Dulles entered the Catholic Church in 1941 while studying at Harvard Law School. After serving his country during World War II in the Navy, he joined the Jesuits in 1946 and was ordained in 1956. He has written 22 books and has more than 30 honorary doctorates.