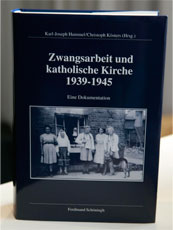 MAINZ, Germany – A German cardinal said a report detailing how the church used slave laborers during World War II was an “important building block” for reconciliation.

“The church’s memory was blind for too long to the fate and sorrows of men, women, youngsters and children who were brought from all over Europe as slave laborers to Germany,” said Cardinal Karl Lehmann of Mainz, former president of the German bishops’ conference. “This documentation, scientifically examining a forgotten chapter of contemporary church history, cannot and should not be understood as a final reckoning.

“It is rather an important building block on the way to a future of reconciliation for the Christians of Germany and Europe,” said the cardinal.

After eight years of research by a special commission, the 703-page report called “The Catholic Church and Forced Labor 1939-1945” was presented in Mainz April 8. Karl-Joseph Hummel and Christoph Koesters headed the commission of historians that prepared the report.

Approximately 8.43 million civil workers and 4.57 million prisoners of war were sent to work for farms, factories, heavy industry and prison camps in the German Reich. The workers were mostly from occupied territories in Eastern Europe.

About half the Catholic Church’s schools, hospitals, convents, abbeys and charitable institutions were confiscated by the German government during the war, the report said. But more than 4,800 civil laborers and nearly 1,100 prisoners of war – mostly from Poland, Ukraine and Russia – were put to work at more than 770 Catholic institutions, such as farms or cemeteries, that remained in church hands. Although slave labor was used in all 27 Catholic dioceses, the largest numbers were employed in Cologne, Muenster, Paderborn, Munich and Freising, Rottenburg-Stuttgart and Freiburg.

“Although the numbers involved were relatively small, they nevertheless remain a historic burden and a challenge to our church,” said the cardinal, whose statement was published on the bishops’ conference Web site. “There is certainly no collective guilt. But as Christians and as a church, we are aware of the responsibility emerging from the weight of the historic past.”

Germany’s Catholic Church agreed in 2000 to pay $2.5 million to former slave laborers as well as another $2.5 million for reconciliation projects.

But the church denied claims that some laborers were mistreated at Catholic institutions and said many priests were punished for violating racist Nazi laws when they insisted on treating slave laborers the same as German workers.

Cardinal Lehmann said the church had decided, despite criticisms, to run its own compensation fund in 2000, fearing some laborers at Catholic institutions could be ineligible for support under separate federal government and business plans.

“Next year, two decades will have passed since the Iron Curtain fell, yet the wounds are not yet healed,” the cardinal said. “Our church has always worked to repair sufferings and wrongs done to others, and to ensure, by taking responsibility and promoting a historical discussion of past guilts and sorrows, that crime and desolation do not have the last word.”

The report said the church had so far paid about $2.5 million to nearly 600 former laborers, 13 percent of the more than 4,500 known to have worked at church institutions, and had donated $4.3 million to 206 reconciliation projects.

In September 2000 the Catholic Church in Austria agreed to support a government “reconciliation fund” after appointing a team of researchers to find out how many wartime slave laborers were assigned to Catholic institutions.