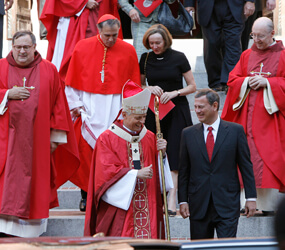 WASHINGTON – Speaking at the 56th annual Red Mass in the nation’s capital, Cardinal Daniel N. DiNardo of Galveston-Houston said today’s followers of Christ must allow God’s word to abide in their hearts and, guided by the Holy Spirit, they must show God’s justice in the world.

“Graced in this manner, we respond in our personal lives of faith and witness and in our professional lives too, not only for the good of our souls but also for the sake of our professions,” said the cardinal, who delivered the homily at the Oct. 4 Red Mass at the Cathedral of St. Matthew the Apostle.

The annual Mass is sponsored by the John Carroll Society, a Washington-area organization that provides spiritual, intellectual and social opportunities for Catholic professionals.

The Red Mass invokes God’s blessings and guidance on the administration of justice under the power of the Holy Spirit, a centuries-old tradition. The Mass in Washington is traditionally held on the Sunday before the first Monday in October, when the Supreme Court usually begins its new session.

The concelebrating bishops, joined by 27 priests at the Red Mass, wore red vestments. The red color of the vestments comes from the color of fire, a symbol of the Holy Spirit.

“In this federal city where the role of lawyer and judge is so important and where the legal profession is so prominent, even ubiquitous, the invocation of the Holy Spirit at the beginning of the judicial year is appropriate and necessary,” Cardinal DiNardo said in his homily.

Referring to Pope Benedict XVI’s Pentecost Sunday homily earlier this year on the Holy Spirit, Cardinal DiNardo said the pontiff noted how people are concerned about the quality of the air they breathe, but their relationship with God and with each other can also become stagnant and need the fresh breeze of the Holy Spirit.

“Further, the ‘fire’ of the Holy Spirit purifies what has become polluted, within each disciple and within the church. Such purification especially affects the tongue, the place where the mind and the heart physically crease our environmental space in speech, action and decision,” the cardinal said.

Speaking of the “clients” served by those in the legal profession, Cardinal DiNardo said, “They are poor and wealthy, confused and lucid, polite and impolite. In some cases the clients are voiceless for they lack influence; in others they are literally voiceless, not yet with tongues and even without names, and require our most careful attention and radical support.”

Prayers were offered at the Mass for government and church leaders, and for the protection of all human rights, especially the right to life of every human being.

A small number of pro-life demonstrators stood across the street from the cathedral’s entrance. Standing near large posters of aborted fetuses, some of them used bullhorns before and after the Mass to urge public officials to stop legal abortion; they also urged Catholic legislators who have supported abortion rights to refrain from receiving Communion.

In his homily, Cardinal DiNardo noted how in the first reading, the prophet Isaiah described the “servant of the Lord … (who) brings God’s saving action. This is the real notion of justice, not an abstraction but the vivid understanding of deed and word together accomplishing integrity everywhere.”

After the Mass, the John Carroll Society held a brunch, and honored a local attorney and law firm for their service to the poor. Each year, volunteers with the Archdiocesan Legal Network provide about $8 million in pro bono legal services.

Barbara Betsock, an attorney in private practice who has accepted one pro bono case from the legal network each month this year, received the Pro Bono Legal Service Award, as did the firm of Winston & Strawn, whose attorneys have conducted in-person client intake biweekly on a volunteer basis.

Participants at the brunch offered a standing ovation for Sotomayor, the Supreme Court’s newest member, when she was introduced before the meal.