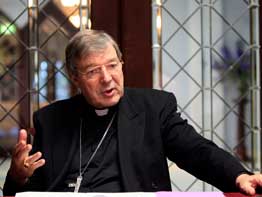 SYDNEY, Australia – Cardinal George Pell of Sydney has announced that his archdiocese will be awarding $100,000 (US$86,000) to support adult-stem-cell research by an Adelaide-based research team.

The grant was won by Stan Gronthos, an associate professor with the Mesenchymal Stem Cell Group at the Institute of Medical and Veterinary Science in Adelaide, and Dr. Simon Koblar, whose team at the University of Adelaide is investigating the capacity of stem cells derived from human dental tissue to change into neuronal cells.

Cardinal Pell said the research had the potential to be used in treating people who have suffered a stroke.

“This is exactly the sort of ethical, innovative and life-enhancing research that the grant was established to promote,” said Cardinal Pell, noting that 10 “highly competitive” applications from stem-cell researchers across Australia were received for this year’s grant judging.

Bernadette Tobin, chairman of the selection panel, said while all applicants met the selection criteria of scientific excellence Gronthos and Koblar “are punching above their weight.”

Tobin, an ethicist at St. Vincent’s Hospital in Sydney, said the recipients’ work was seen as “highly likely to produce important new knowledge, hope for new treatments and therapies.”

Previously the Sydney Archdiocese’s research grants have funded three different kinds of research into the therapeutic potential of adult stem cells, including the treatment of Parkinson’s disease and the regeneration of human skin after catastrophic burns.