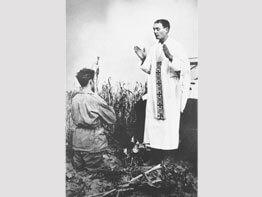 PILSEN, Kan. – History was made in the Diocese of Wichita June 29 as nearly 700 people witnessed the formal opening of the canonization cause of Father Emil Joseph Kapaun at St. John Nepomucene Church in his hometown of Pilsen.

But Father Kapaun’s brother, Eugene, said his Korean War hero brother would have been humbled about the gathering and wouldn’t have said much about the formalities, just a couple of words, perhaps: “Aw, shucks.”

Father John Hotze, the episcopal delegate for the cause, also had two words after the ceremony was over: “Thank God!”

Father Hotze, who works in the diocesan marriage tribunal, was relieved that many months of work finally reached a milestone.

“It was a great day, a day we can be both proud of our past but also look forward to what is to come,” he said in anticipation of the day the cause ends with Father Kapaun’s canonization.”

“If we are doing God’s work then it will continue even faster than it’s going now,” he added.

Wichita Bishop Michael O. Jackels, who celebrated the Mass with retired Auxiliary Bishop Francis X. Roque of the U.S. Archdiocese for the Military Services and several diocesan priests, reminded those attending the Mass that miracles are now needed to complete the canonization process.

There has already been considerable work completed toward Father Kapaun’s cause. Archbishop Edwin F. O’Brien, of the Archdiocese of Baltimore, started the process in 1993 when, as head of the military archdiocese, he called for Father Kapaun to receive the title of servant of God.

(En route to World Youth Day in Australia, Archbishop O’Brien traveled through Seoul, Korea, where he said Mass with Father F. Richard Spencer, an archdiocesan priest serving as a chaplain there).

Since then, both the military archdiocese and the Diocese of Wichita have been collecting information on Father Kapaun’s life of virtue. The information gathered thus far will provide a basis for the documentation needed for the canonization process.

In the church’s process leading to canonization, the first step is the declaration of a person’s heroic virtues, after which the church gives him or her the title venerable. In general, the church must then confirm two miracles before sainthood is declared. The first miracle is needed for beatification and the second for canonization.

Father Kapaun, a priest of the Diocese of Wichita, died on May 23, 1951, in a North Korean prisoner of war camp. He was serving as a U.S. Army chaplain when he and his men were overrun during battle.

The chaplain had the chance to fall back to safety during the fighting, but instead chose to stay and was captured along with his men. As a result of his heroic example in serving his fellow soldiers in the prison camp, his captors eventually forced him into the camp hospital, known to the prisoners as the “death house.”

Father Kapaun is an authentic witness and is worthy of veneration, Bishop Jackels said after those involved in the cause took an oath to faithfully fulfill their position and signed a document attesting to their promise.

“Many of those who will be working on this cause are working motivated by their faith and by their dedication to Father Kapaun,” Bishop Jackels said.

“I ask most of all that you commend to your prayers people who are in need of the intercession of Father Kapaun,” he added.