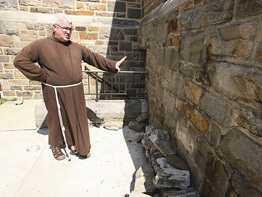 Fed up with mounting violence surrounding their place of worship, a group of candle-wielding parishioners from St. Ambrose, Baltimore, will pray on Good Friday as their pastor, Father Paul Zaborowski, O.F.M. Cap., blesses the four corners of the church’s Park Heights property.

“Calling the police hasn’t helped,” said Father Zaborowski, who said a vigil will take place following the 7 p.m. Good Friday service at the church. “We’re in need of a stronger authority.”

Crime scene tape had cordoned off a portion of the St. Ambrose grounds April 2 after a 15-year-old boy was stabbed several times.

The boy was treated for his injuries at Sinai Hospital of Baltimore and released, but no arrests were made and no motive was established for the attack, said Officer Troy Harris, a spokesman for the Baltimore City Police Department. Blood stains remained on the sidewalk behind the church for part of Holy Week.

Though Father Zaborowski suspects the attack was gang related, the police department was unable to confirm that suspicion.

“It’s difficult to corroborate that when the victim isn’t being forthcoming with information,” Officer Harris said.

As horrifying as this incident was to the parish clergy, parishioners and residents in the neighborhood, the stabbing was only a fraction of the violence that has plagued the 4500 block of Park Heights Avenue throughout the 2007 Lenten season.

Since Ash Wednesday, there have been three other violent acts perpetrated on the church grounds, most of which involved several youthful looking people kicking and beating a youngster while others stood by and watched, Father Zaborowski said.

“It looks like gang violence to me,” he said. “During one of the incidents, I yelled out that I was going to call the police and that didn’t intimidate them at all. They know it’s going to take the police a long time to get here, if they bother showing up at all.”

The vigil was intended to demonstrate a united community battling violence around the church and to seek the Lord’s guidance in dealing with the growing aggression in their neighborhood and throughout the city of Baltimore.

Since the beginning of 2007 there have been more than 70 homicides in the city.

“This is very frustrating to me,” said Gloria B. Harris, a St. Ambrose parishioner for the past 25 years who lives near the church. “I believe in the power of prayer, but I also believe we need to come together as a community and work with the police and not against the police.”

Father Zaborowski said he has become exceedingly frustrated with the Baltimore City Police Department’s slow response to his calls for help during recent violent occurrences on church property.

Officer Harris said that after checking police records, the response time for each call to St. Ambrose was within the department’s average of three to five minutes and he saw no reference of them not showing up.

“Sometimes – in the heat of the moment – it seems like more time has lapsed,” he said.
The fact the violence has occurred on the grounds of the church is the most upsetting to Ms. Harris, who attended the candlelight vigil.

“This is sacred ground, for goodness sake,” she said. “That’s just appalling to me. It just shows they have no respect for what they do and where they do it.”