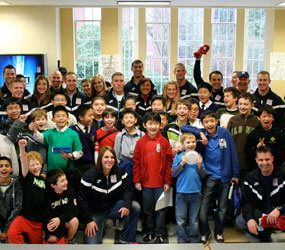 VANCOUVER, British Columbia – Members of the USA Bobsled & Skeleton Federation were surprised and grateful at the welcome they received when they spent four days training at a Catholic school in Vancouver before the Feb. 12-28 Winter Olympics.

Curt Tomasevicz, the brakeman for USA I in the men’s four-man bobsled, said that when he and his teammates finished working out on their last day, they ate lunch with Vancouver College’s fourth- and fifth-grade students. When they entered the lunchroom, raucous cheers and high-fives greeted them, even though the athletes were dressed in full USA gear and surrounded by Canadian flags on the lunchroom walls.

“This reminds us exactly why we started playing sports,” said Tomasevicz, noting that children still embody what sports are all about. “They’re not caught up in the politics. They just want to be part of it. Whether it’s to shake a hand or get an autograph, they really enjoy the aspect of pure competition.”

The former Nebraska Cornhusker football player, who attended Sacred Heart Catholic Church in Shelby, Neb., as a youth, said being at the school was a refreshing change of pace from the stress of Olympic preparation.

“It definitely gives our minds a little break from the intense training,” Tomasevicz said.

He praised the facilities at the K-12 school run by the Congregation of Christian Brothers.

“It’s been amazing,” he said. “The facilities here are world-class. Some of them are as good, if not better, than the facilities we use back home.”

Emily Azevedo, who competes in women’s bobsled, is the brakeman for USA III. She, too, expressed surprise at the U.S. team’s reception and added, “It’s been a bonus to get to spend some time here with the kids at school.”

Azevedo, originally from Chico, Calif., said her spirits were lifted when the students at Vancouver College cheered for her and her teammates. She said the students’ enthusiasm directly reflects the U.S. team’s excitement at being able to compete at the Vancouver games.

“I think we forget, sometimes, how big an accomplishment it is to be an Olympian,” she said. “It’s nice to walk in to that kind of cheering; it reminds us of that excitement.”

Noelle Pikus-Pace, a U.S. skeleton athlete from Orem, Utah, said the generous welcome her team received from Vancouver College was more than she imagined. She said having the opportunity to connect with people outside of the Olympic Village is invaluable.

“Being inside the village is great, but it’s really nice for us to step outside of that and remember why it is we do this,” she said.

Scott Novack, the federation’s high performance director, said his group picked Vancouver College as a pre-Olympic training site because it had everything they wanted: a top-notch facility that was close to the Olympic Village and the airport, as well as easily accessible and welcoming.

“Vancouver College met everything we were looking for. We’re kind of unique with the combination of having to use the track and heavy weights for training,” Novak said. “They welcomed us with open arms into this world-class facility.”